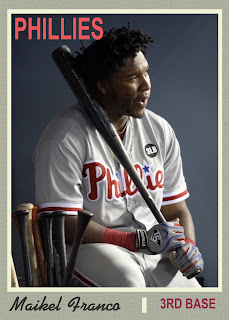 As has been my tradition over the past few years, when Topps releases the first images of its flagship set for next season I've also unveiled the Topps design from the past that will be used for next season's Chachi set.  Based on the votes cast by you, and careful consideration from the 2016 Chachi Set Planning Committee, I'm pleased to announce that you'll be seeing a lot of the 1970 Topps set on this blog next season. 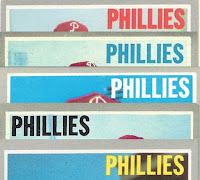 Here are a few other thoughts on this selection:

I didn't hold much hope that my favorite (1978) would win, so I was hoping that 1970 would come through... I have to say I was greatly surprised at how decisive a win it was!

I was pondering your "color dilemma" (because, of course, these are things I think about as well) and flipping through my 1970 cards and it occurred to me - this will be the first Chachi set where the uniforms worn by the current Phillies are more-or-less the same as worn on the originals. Pretty cool...

My first reaction to the colors is to not go strictly by the Topps ratio, but allow the photos to dictate which color works best... Bright colors in front of dark backgrounds and vice versa. You could also stick to one or two colors for the Phillies and use the other colors for some of the "inserts".

I was mildly surprised that there aren't any Phillies which have the team name as "PHILS"... I guess I was thinking of CARDINALS/CARDS and YANKEES/YANKS.

I didn't realize until I started looking, but there were actually a couple of cards with *green* teams... Bob Locker (Pilots) and Dick Hall (Orioles) are the two I have.

I don't know how you'd do it, but I'd like to see some sort of Lowell Palmer "tribute".

I'm pretty excited about this selection too. I like your idea for the color choices. I won't know until I have the photos picked out, but I can see going with red/blue/white/black/yellow depending on how it works with each particular photo.

First photo I find of a current Phillies player in shades gets the Lowell Palmer tribute card!