I added my first Phillies strip card to my collection recently - this 95-year-old card of former Phillies pitcher Babe Adams.  When Jefferson Burdick compiled The American Card Catalog, he designated cards from sets available in strip form with a W prefix, hence this set's designation as W516-1.  The 30 cards in the W516-1 set were sold in long strips and then hand cut by either the store owner or the strip's buyer.

But here's the thing about this card . . . that isn't Babe Adams featured.  According to his Baseball Reference page, Babe Adams was a pitcher who spent his entire 19-year career with the Cardinals (for 1 game in 1906) and then with the Pirates (for the remaining 481 games and 18 seasons).  Babe Adams never played for the Phillies and the picture on this strip card looks nothing like Babe Adams.

This is a card of Phillies catcher Bert Adams, who appeared in 240 games for the Phillies between 1915 and 1919.  There's a picture of Adams on the Philadelphia - The World War I Years blog (shown below) that matches up with the guy pictured on the strip card above.  Adams' biography from the Baseball Reference Bullpen also seems to confirm that this card features Bert and not Babe Adams.

I believe this would be Adams' sole Phillies baseball card and it's interesting to me that none of my reference material, including numerous books, websites and the Standard Catalog itself, list this card as an "UER" or an uncorrected error.  If there are any master collectors out there of Babe Adams baseball cards, you can skip this one.  Bert Adams master collectors however should track this one down.

Finally, my apologies if you've reached this site through a Google search for "babe strip."  This is not the site you're looking for. 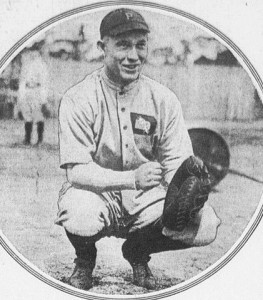 Email ThisBlogThis!Share to TwitterShare to FacebookShare to Pinterest
Labels: 1920, Adams B.

Babe was a pretty common nickname back in that time; it's possible that Bert had picked up the moniker as well. Just spit-ballin'.

I thought about that too . . . but the fact that his position is listed as pitcher, when Bert was a catcher, makes me think this was just an error.

What's the card worth is the question