One of my collecting goals is to eventually own a full run of Phillies baseball cards from all the Topps base sets beginning in 1951.  With these three cards obtained in the annual Santa Brings Way Too Many Awesome Baseball Cards to Jim, courtesy of my Mom, I'm a little bit closer to wrapping up a complete run of Phillies Topps cards from the 1960s.

Ferguson Jenkins appeared in eight games with the 1965 and 1966 Phillies before the horrendous trade in April 1966 that sent him to the Cubs.  This is Jenkins' rookie card and his sole vintage Phillies card.  There would be few reprints of this card - without Bill Sorrell - in sets from the early 2000s, and Jenkins also received a Phillies card in the 2004 Topps Retired Signature set.  As an aside, the first time I ever realized that this future Hall of Famer had pitched with the Phillies is when I pulled his 1983 Topps Super Veteran card from a pack back in the day.

Jenkins' rookie card was one of a handful of older Phillies Topps cards I deemed to be unobtainable when I first started collecting many years ago.  Thanks to my Mom, it's now in my collection.

For what it's worth, this is Sorrell's only appearance on a Phillies card.  He appeared in 10 games with the 1965 Phillies, hitting .385 (5 for 13) as a September call-up.  He spent all of 1966 playing in San Diego for the Phillies Triple A team and then was selected by the Giants in November 1966 in the annual Rule 5 draft.  He earned a Giants Rookie Stars card (with Dick Dietz) in the 1967 Topps set and he reappeared in the 1971 Topps set with the Royals.

This Art Mahaffey card from my favorite Topps set from the 1960s gets me to just six cards away from having a complete 1965 Topps Phillies team set.  I'm down to needing the Johnny Callison league league card and five high numbers.  This would be Mahaffey's final Phillies Topps card, as he was traded to the Cardinals following the 1965 season.

Finally, this is my favorite card from the 1967 Topps set, featuring two of the best Phillies players from that era on the same card.  Two of my favorite cards growing up were the multi-player Phillies cards of Pete Rose, Mike Schmidt and Larry Bowa in the 1981 Fleer set and the Schmidt and Rose card in the 1982 Donruss set.  The first time I saw either of those cards, I thought I had hit the Phillies baseball card gold mine.  I imagine collectors finding this Richie Allen and Callison card in packs of their 1967 Topps felt the same way.

If you're keeping track at home, my Mom found eight of the ten cards that had been on my Ten Most Wanted - Vintage list and gave them to me for Christmas.  And no, you can't have her. 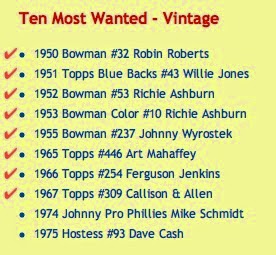 Obviously a great group of gifts from your mom!

I bought a slightly beat-up version of that Jenkins/Sorrell card years ago and sent it to Bill Sorrell for his autograph. Alas, it never came back. I had planned to find another beat-up copy, slice it in half, and send just the Sorrell half to him to sign, figuring that if it really had no value at all, he wouldn't keep it. (I would then have reunited the halves in my collection.) But he passed away, in 2008, before I could put my plan into action. I will probably never have a signed Bill Sorrell Phillies card in my collection....