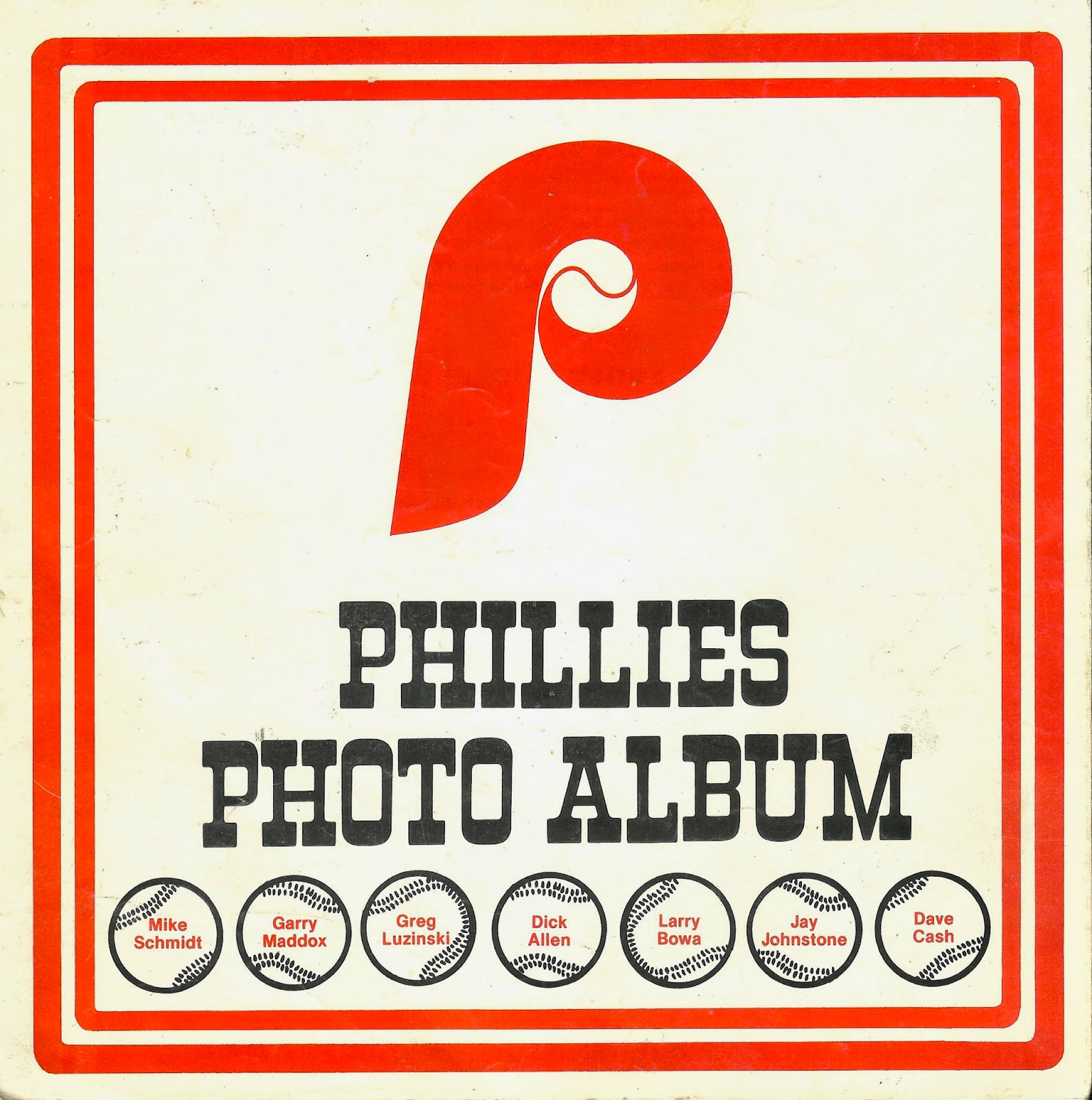 One of my favorite stops on the Ocean City, New Jersey boardwalk is the quaint little Only Yesterday shop.  The newest items for sale in the store are probably from the late 1980s and I spend a good chunk of time each year checking out the old stuff and commenting to one of my family members, "I used to have one of those."  The shop carries everything from vintage vinyl to old magazines to antique postcards to Happy Meal trinkets from the 1970s.  In the back, there's a section dedicated to old sports publications.

I found this 1975 Phillies Photo Album in between the 1974 Phillies Yearbook and a program from 1975 celebrating the silver anniversary of the 1950 Whiz Kids.  I had never seen this photo album before and for $12, I couldn't pass it up. 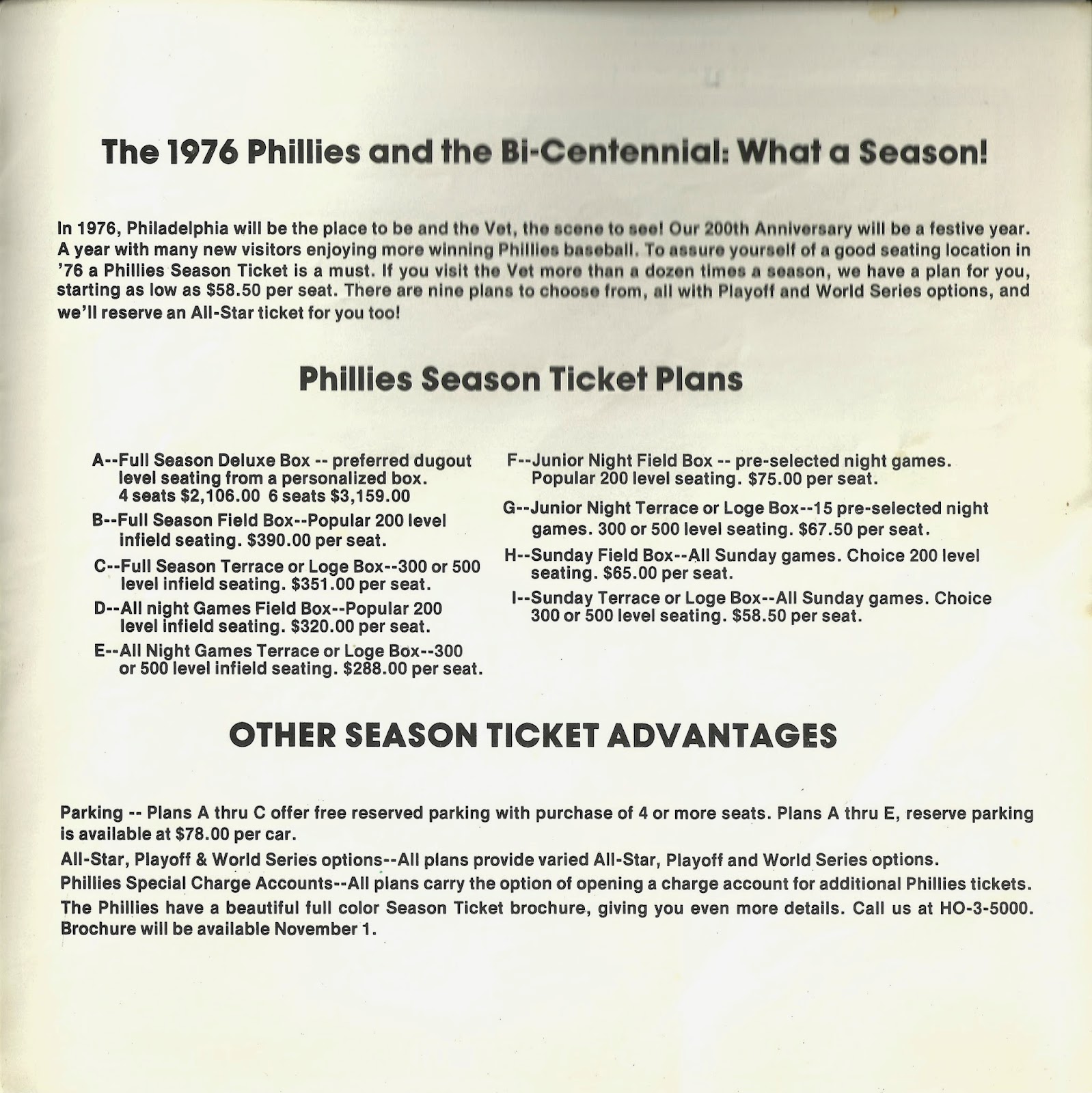 There's not a lot on the internet about this photo album, except for a few random websites containing a "checklist" of the seven player photos included within.  The album is connected, accordion-style, and it doesn't look as if the photos were meant to be separated.  There's no perforation or other markings indicating that the photos should be divvied up.  The back of each photo contains career stats through the 1974 season along with a nice full bio of each player featured.

If I had to guess, the photo album was a late season give-away which accounts for the inclusion of Garry Maddox, who joined the club in May after being acquired from the Giants.  The last page contains a season ticket plug for the 1976 Bicentennial season.  Plan G interests me the most, as $67.50 (or $135 for two seats) seems like a bargain for 15 night games.

It's worth noting that the seven players presented are the 1975 position player regulars, with the exception of catcher Bob Boone.  A bad knee limited Boone to only 97 games in 1975, so it makes sense that he'd be the odd man out with only seven slots open for the photo album.

Presented below are the seven photos, including a fantastic look at Mike Schmidt's mid-1970s perm.

That's a nice-looking album! It's always fun when you run across a collectible you weren't aware of.

I was able to identify Jay Johnstone without reading the signature, do I get bonus points for that?

I still have mine. The photo album was given out on Fan Appreciation Night at the Vet in September 1975. You don't see many of these on Ebay. I'm glad you were able to add this to your collection.

Nice find! I've been going to that store since I was a kid, I swear they never get anything new in.

Got my Cormier btw, thanks again!

Rich - Thanks for the info!

Matt - Check the Phillis publication bin. The '75 Photo Album definitely wasn't there last summer and a few summers ago I found a copy of nice Yearbooks from the early '70s at reasonable prices.

That's the hardest to find of the three photo albums (that, 1976 and 1980). Nice find! I like that store, although I've only ever been there once, quite a few years ago. I'm glad to hear it is still there.