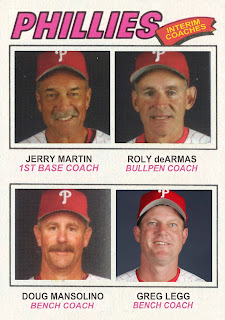 To wrap up my series of posts on recent Phillies coaches, I needed a catch-all post to document those men who held official coaching positions outside the normal coaching positions.  According to the Phillies Yearbooks and Media Guides back to 1970, these are those "other" guys:

There was also a Chachi card I wanted to feature, showing the team's four interim coaches from the wonderful 2008 season.  These guys aren't listed on the official coach's roster within the team's Media Guide, but they definitely served time with the team during the 2008 season.

Roly de Armas' name came up within the post I did on the team's bullpen coaches, and you should check out the comments to that post for further reading as to why he was with the club in 2008.  Former Phillie Jerry Martin served as the club's interim first base coach early in the year while regular coach Davey Lopes recovered from prostate cancer surgery.

Finally, both Greg Legg and Doug Mansolino spent time with the club when regular bench coach Jimy Williams left the club to tend to personal matters.  These guys don't appear on any official Phillies lists as being a part of the 2008 club, and if not for this post and their Chachi card, this pertinent knowledge* could have been lost in the sands of time.

*At least to maybe a dozen of us.

A custom card of interim coaches? That's something!

Greg Legg, baby--a true Phillies lifer! That's a sharp card, too. It is inspired by the Blue Jays and Expos coaches cards from the 1977 OPC set, right?

If you ever find yourself with too much time on your hands, you should check in with Bob Lemke, formerly of Krause Publications (publisher of Baseball Cards Magazine, and maybe also Sports Collectors Digest), about whether and how you could go about printing sheets of Chachi cards (even blank-backed). You've probably seen his blog where he has his own custom cards featured every so often, and you can buy them for, I think, $6 each. It would be awesome to have Chachi cards in binders, or autographed, or both!

Steve - I've actually purchased a few Phillies cards from Mr. Lemke in the past and I've been very impressed. I used to print my Chachi cards, but it got to be too time consuming (and expensive) so now I just enjoy them virtually.

I won on eBay recently a Phils card you very likely do not have: 1971 Carl Aldana Set, card #2, of Jim Westlake. Westlake struck out in his only major league at bat, for the 1955 Phils. He was the brother of Wally Westlake, who had a 10 year career but also was 0-for-his-career with the Phillies (4 at bats in 1956) but also managed to get a Phillies card out of it (his was 1956 Topps).

I bought the Ashburn and Bouchee cards.

Never heard of that '71 set. I'll need to do a little research!