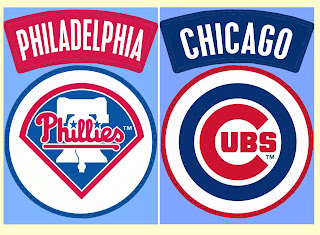 At the Ballpark:  Most of the buzz around the ballpark this weekend will be due to Hall of Famer Ryne Sandberg's return to Wrigley Field as the interim manager of the Phillies.  It should be a cool weekend for Sandberg, and hopefully his team can add a few wins for him.

Today, the first 10,000 fans will receive the fourth in a series of Topps Archives Cubs cards, created especially for Wrigley.  Tomorrow afternoon is Anthony Rizzo bobble head day and the first 5,000 kids will receive a Cubs diecast car on Sunday afternoon.

1973 Topps Flashback:  The last flashback featured players with a common connection.  This time, there's no direct connection between Dick Selma and Jose Cardenal, other than they both spent time with the Phillies and the Cubs.

Right-handed reliever Selma came to the Phillies in November 1969 in the deal that sent long-time Phillie Johnny Callison to Chicago.  He spent parts of the next four seasons with the Phils, going 11-21 with a 3.93 ERA in 132 relief appearance and 10 starts.  By the time collectors were opening packs of 1973 Topps cards, Selma had already been released by the Phillies as he was cut loose in May 1973.

Cardenal's lengthy career was winding down by the time he came to the Phillies in October 1977.  He was with the team for the entire 1978 season, but was sold to the Mets in August 1979.  Almost four years ago, I ran a post featuring quite possibly one of the best Topps cards from the 1970s, starring Cardenal's magnificent afro.  I also featured this piece of trivia on another Cardenal post:


If you asked the question, "Who is the last Phillie to wear the number 1?," most people would respond, Richie Ashburn.  But most people would be wrong.  Jose Cardenal wore #1 for the Phillies in 1978 and until he was sold to the Mets on August 2, 1979.  Richie had his #1 retired on August 24, 1979, and no Phillie player has worn it since.  And now you know.

Danny Ozark: Jose, the front office wants you to give up your uniform number so they can retire it.

Ozark: Paul Owens told me to tell you that you'll regret it if you don't.

Cardenal: Nope. I won't do it.

Ozark: Jose, you've been sold to the last place Mets.

And that's exactly how it happened.

Another (actual) Ozark exchange, with a Philly reporter:

Reporter: So Danny, what do you think of this kid Lonnie Smith?

Ozark: He's got as much chance of making this team as I have of managing it.

Reporter: So he's made the team?