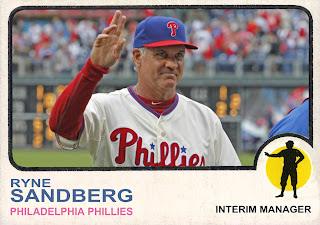 One Sentence Summary:  Interim manager Ryne Sandberg made his triumphant return to Wrigley Field yesterday afternoon and his team was kind enough to deliver a come-from-behind, 6-5 victory.

What It Means:  I heard this cool fact on the post-game show while driving home from work today.  The Phillies have won seven of their last ten, and they had to come from behind for all seven of those wins.  Glass half full - that's encouraging.  Glass half empty - the Phillies sure have been losing in a lot of ballgames lately.

What Went Right:  In the top of the ninth, Michael Young knocked in the winning run with a line drive single to right, his fourth hit of the game.  Kevin Frandsen had tied the game at 5-5 with a solo home run in the seventh.

The Phillies had to battle back from a 5-0 deficit as a result of a very shaky outing from Roy Halladay.  Halladay left after five innings having surrendered five runs on seven hits.  He also hit two batters and uncorked a wild pitch.

Featured Card:  This is the first time since I started the Chachi series of cards (back in 2005) that I've had to create two manager cards in the same year.  I could have gone with the same standard 1973 Topps manager card, featuring four of the coaches, but I already did that with Charlie Manuel's card.  So Sandberg gets a solo card, and l specifically had to make it a horizontal pose since "Interim Manager" looked really smooshed on a vertically oriented card.
Posted by Jim at 7:00 AM