Another Massive, Post-Vacation, Why Do I Even Bother Catch-Up, Part 8 of 8

One Sentence Summary:  The Phillies folded easily in a forgettable, boring 4-1 loss to the Braves. 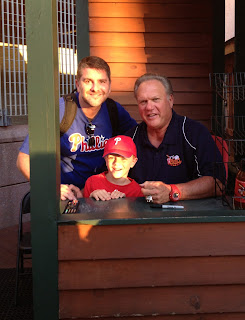 Featured Card/Field Report:  My friend John had to travel home on Sunday morning, but Tommy and I attended this game with my oldest son Doug.  Prior to the game, the 1993 National League Champions were honored in a fantastic ceremony.  Receiving the loudest and longest applause was the captain of that team - Darren Daulton.  Daulton underwent surgery just a few short weeks ago to remove cancerous brain tumors and we’ll continue to send good vibes and prayers to Dutch.

I’m down to 2-7 this year in games I’ve attended, and it’s looking as if a winning season is not in the cards for me yet again.  Other than getting to catch up with Tommy, the highlight of this game was getting our picture taken (again) with Greg Luzinski.
Posted by Jim at 2:00 PM

I had to Google "Full Shots" to find out what they are. Holy crap, How did an oversized set get past me for twenty years?

...So now I've got this Dutch Full Shot and 4 others on my ever-expanding wantlist.

Always happy to help fellow oversized baseball card collectors find something else to try to track down!