Another Massive, Post-Vacation, Why Do I Even Bother Catch-Up, Part 7 of 8

One Sentence Summary:  The Phillies had a chance to win this one, but eight walks from the pitchers eventually doomed them in an extra-inning, 5-4 loss.

What It Means:  It's not going well.

What Went Wrong:  John Lannan was chased in the fifth, and four Phillies relievers combined to hold the Braves scoreless until Jake Diekman walked the bases loaded in the 12th.  Justin De Fratus couldn't get out of the jam, and the Braves scored the eventual winning run.  On a positive note, Zach Miner made his Phillies debut and pitched 2 1/3 scoreless innings.

Featured Card/Field Report:  I was there to witness all 12 painful innings.  I was lucky enough to pick up a cool 1993 Phillies print and I waited in line to have Mariano Duncan sign it.  Now to track down the other guys on the print . . . 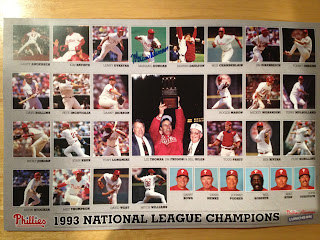 We returned from the shore on Saturday morning and I drove to Philly to meet two of my good friends and former college roommates at the ballpark.  Sadly, both John and Tommy are life-long Braves fans, so this game was much more enjoyable to them then it was to me.  This game dropped my personal record this year to 2-6.  (Click photos below to enlarge.)

Seats in the Hall of Fame club?

We figured we should splurge a little and it was well worth it. I'd love to try to sit in the HOF club maybe once a season if possible.

Somehow I found one of those prints on the ground on Sunday. Maybe they had extras they were still giving out? It's a nice print.

I have read that you can get autographs in the HOF Club on Alumni Weekend as the players are all there. Did you see any of them wandering around?

There was a suite next to where we were sitting (Section 220) that was blocked off with those stanchion thingys surrounding the entrance-way. I noticed five or six autograph collectors stationed themselves there throughout most of the game, and then their numbers grew towards the end of the game.

We lingered around for a minute following the game, and I saw Tony Taylor and Mariano Duncan exit and what looked like Danny Jackson still hanging out inside. My guess is that some of them wander around during the game, if for no other reason than to stretch their legs or pick up some crab fries!