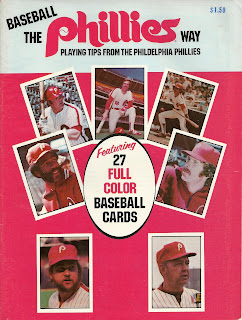 During the first Gallery Week, I featured the Phillies team set from the quirky, yet lovable 1976 SSPC set.  I broke the gallery into two posts - part one and part two.  Today and tomorrow, I'll feature the Phillies cards from a set released by SSPC in 1978.  This set is either listed as "1978 SSPC Baseball the Phillies Way" or "1978 SSPC 270."  The latter name derives from the fact that these cards were included as an insert within a baseball magazine entitled, you guessed it, Baseball the Phillies Way.  The publication contained tips on how to play each position and how to better your hitting, pitching and fielding skills, among other things.  The back of the front cover even contained a letter to the reader from then-Phillies front office personnel Paul Owens and Dallas Green.

The 1978 SSPC 270 name derives from the fact that SSPC released 270 total cards that year, all spread out among a number of team publications.  For this reason, the Phillies cards are numbered "0028" to "0054" within their publication.  (I've dropped the "00" prefix in the galleries.)  The set has the feel of the 1976 SSPC set, but adds horizontal cards and more cards of coaches this time around.

Back in the early '80s, I bought two of these magazines at the Ocean City Baseball Card Show - one to keep in tact and one from which to skillfully cut the baseball cards from.