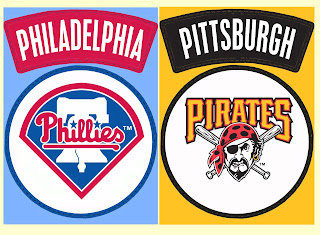 At the Ballpark:  There aren't any special giveaways or promotions during this series - just three games between the best team in baseball . . . and the Phillies.

1973 Topps Flashback:  Today's flashback features a quartet of players who spent time with both Major League teams from the Keystone State.

Of the players featured here, I know the least about Jose Pagan and I was surprised to see he accumulated a solid 15-year career as an occasional starting shortstop and utility infielder.  Pagan played in just 46 games for the 1973 Phillies at the very end of his career.  Prior to that, he spent eight seasons with the Pirates (1965-1972) and parts of seven seasons with the Giants (1959-1965).  This is his sole mainstream Phillies baseball card appearance.

Pagan, Richie Hebner and Al Oliver were all teammates on the World Champion 1971 Pirates club.  Hebner joined the Phillies for two seasons in 1977 and 1978, and Scoop spent a brief time with the Phils in the summer of 1984.

Bill Robinson was serving his first stint with the Phillies when his 1973 Topps card was released, and he was traded to the Pirates in April 1975 for pitcher Wayne Simpson.  Robinson would win a ring with the 1979 Pirates as their starting left fielder.  Like Pagan, he finished up his impressive career with a short stint with the Phillies in 1982 and 1983.
Posted by Jim at 6:05 PM

I love how Topps artists would just paint over the Pirates collar as if that made it look like a Phillies uniform. I realize that they didn't have much choice, but it still amuses me whenever I see something like it.

I remember the joyful feeling when players like Bill Robinson (1972) and Jim Palmer (1969) were rescued from the minor-league scrap heap, after having been in majors, then demoted for an extended period of time. Also to a lesser extent with Jay Johnstone in 1974 or 75 (maybe because neither I nor anyone I knew followed the Angels!)

For some reason, I don't feel the same way about Larry Hisle.

The Phillies acquired Pagan to help Mike Schmidt get his career off to a good start.

Did the Topps air brush guys think they were actually fooling us?

Jim from Downingtown - I had no idea that the Phils brought in Pagan to help Schmidt. Good stuff.