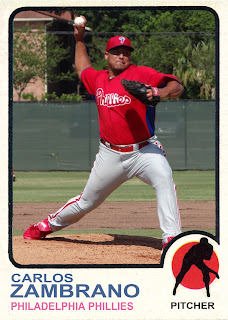 We interrupt this week of Rick Schu cards to bring you a non-official Chachi card, featuring Carlos Zambrano.  The wacky and unpredictable Big Z was released by the Phillies yesterday, and General Manager Ruben Amaro, Jr. confessed that the pitcher's recent shoulder strain would be too much to overcome this season.  For his efforts, and because I'm thankful he didn't actually pitch for the Phils this year, the right hander now graces a Chachi Almost card.

Surprisingly, Zambrano had a decent showing for the team's minor league affiliates, going a combined 3-0 in seven starts with a 2.04 ERA.  He left his last start in late June with the shoulder pain and he hasn't pitched since.