For just the second time since I started this series, I came across a year in which every single player spending time with the Phillies actually has a Phillies baseball card.  (The only other year to this point is 1993.)  I don't think there's any real reason for this to have happened in 1985, as it wasn't a terrific year for the Phils.  But with a little luck, and the existence of the team-issued Tastykake sets, every member of the 1985 squad graces at least a little Phillies cardboard.

In fact, there are just 10 players who appeared with the Phillies in 1985 who didn't appear in either the regular Topps base or traded set.  I created cards for these 10 players, and posted them here.

Right-handed reliever Dave Shipanoff just makes the cut with three total cards from the 1986 Donruss, Fleer and Tastykake sets.  He appeared in 26 games with the Phils in late 1985, before injuries cut his career short. 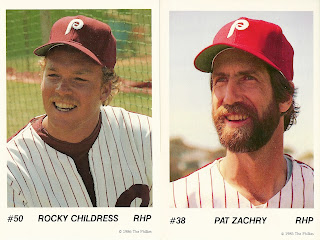 Thomas finished up his 15-year career with the Phillies.  He has the distinction of appearing with three different teams on 1985 baseball cards.  His 1985 Topps card features him as a member of the Expos.  The Expos sold Thomas to the Angels in September 1984, and he played in just 14 games with California.  Fleer hustled a little more than Topps and has him with the Angels on his 1985 card.  Finally, Topps issued a Phillies card for Thomas within its traded series.

The inclusion of Knicely's card within the 1986 Topps set always puzzled me, and it would never happen in today's Topps sets.  Knicely came to the Phillies in August 1985 as part of the Bo Diaz deal with the Reds.  Injuries limited his time with the club, and his final Phillies line reads - 0 for 7 with 4 strikeouts.

Technically, Zachry has two cards as he's featured with the rest of the Phillies pitching staff on a multi-player card included within the 1985 Tastykake set.  The 1976 National League Rookie of the Year appeared in just 10 games for the Phillies before getting released in June 1985.

Surhoff, B.J.'s older brother, pitched just one full inning for the Phillies, earning a win on September 8th.  On September 13th, he was traded to the Rangers for Dave Stewart.

I forgot about that Rich/Rick Surhoff card. He is a bartender at the Berkshire Country Club in Reading (although I don't know whether that is just a part-time gig). I met him once there at a reception, and he is a heck of a nice guy. I said, "I think I saw you pitch a 7-inning no-hitter", and he replied, "I get that a lot--that was actually my teammate and still best friend Rich Gaynor." D'ohh!

He was at a Poppel card show a couple months ago as well. Good to see that he got a Phillies card. He also managed to appear on a Donruss Rated Rookies card (as "Rick" Surhoff), which is the one that I imagine he mostly sees from autograph collectors.

Next time you run into him, please let him know there's at least one other collector out there who is grateful for his sole Phillies card!