Phillies at Indians: April 30th to May 1st 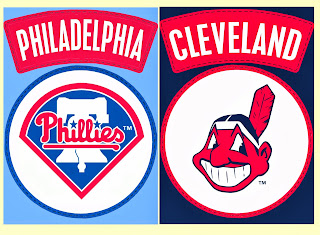 At the Ballpark:  There's not one darn promotion or giveaway for either of these games at the ballpark formerly known as Jacobs Field.  It's just two good, old-fashioned baseball games with those long-time rivals, the Phillies and the Indians.  (I still haven't accepted interleague play.)

1973 Topps Flashback:  On November 30, 1972, the Phillies traded outfielders Roger Freed and Oscar Gamble to the Indians for outfielder Del Unser and minor leaguer Terry Wedgewood.  One of the more notable things about the 1973 Topps set is that it was the last set of the vintage era released in series form.  Unser's card, found in series two, still features him as a member of the Indians.  Gamble's card, found in series three, is also an Indians card, but in name only.

Gamble is clearly sliding into second base at Veterans Stadium as the Reds shortstop, Davey Concepcion, looks on.  This is one of the most iconic cards of the 1973 Topps set, and the fine 1973 Topps set blog 1973 Topps Photograpy from the late, great Chris Stufflestreet paid tribute to the card here.  Gamble spent three seasons in Cleveland before being traded in November 1975 to the Yankees, which of course spawned this card.

The 1973-1974 seasons were Unser's first stint in Philly, and he was the team's regular center fielder.  In those two seasons, he hit .276 with 22 home runs and 113 RBIs.  He'd depart for five seasons with the Mets and Expos before coming back to the Phillies via free agency prior to the 1979 season.  I've featured Unser's cards and written about the highlights of his Phillies career here and here.
Posted by Jim at 6:05 PM