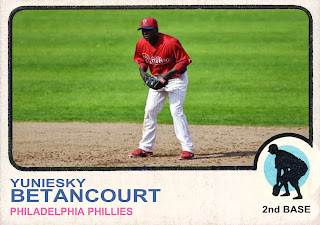 One Sentence Summary:  The Red Sox held off a late Phillies rally for the 7-6 victory.

What It Means:  It means I'll have to wait until the four regular season victories against the Sox in May to taunt the good folks in Section 36.

What Went Wrong:  The big blow dealt to starter Cliff Lee was a wind-aided three-run home run by Jackie Bradley in the second inning.  Overall, Lee allowed four earned runs while striking out seven in his 5 1/3 innings of work.  The Phillies closed the gap with back-to-back eighth inning home runs from Chase Utley and Ryan Howard.

Featured Card:  Infielder Yuniesky Betancourt was almost a Phillie, but "close" has the same application when it comes to Chachi cards as it does with horseshoes and hand grenades.  I made the card featured here in anticipation of Betancourt making the team out of Spring Training.  He played steady (and at times dazzling) defense and hit .447, but ultimately his career futility at the plate overruled his 17-game spring stats.  Betancourt's minor league contract contained an out clause which required the Phillies to release him if he wasn't on their 25-man roster by yesterday.  He wasn't, and his release was granted.

Camp Head Count:  33 minus 1 = 32.  Betancourt's release all but guarantees that Freddy Galvis has made the team as its back-up middle infielder.
Posted by Jim at 12:00 PM

Another highly important spring training game in the books.

Hopefully you'll be waiting a lont longer than May!