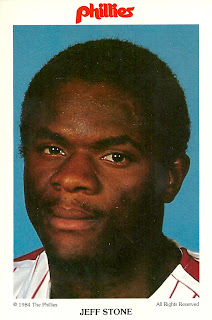 Thanks to the good folks over at the up and coming new blog, Phillies Stadium Giveaways, I'm one step closer to crossing a white whale off my want lists.  The 1984 Tastykake Phillies Update set contains seven postcard-sized cards of late season roster additions, and I've never seen a set for sale anywhere.

With the addition of this Jeff Stone card, graciously supplied from Phillies SGA, I'm down to needing just six cards from the set. 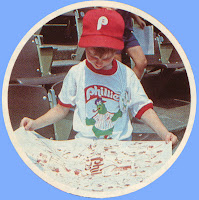 Please check out the fantastic Phillies Stadium Giveaways blog when you have a chance.  It has already helped me identify the date of the first Phillies game I ever attended.  The giveaway at my first game was a Phillies poster painted by Dick Perez and featuring the entire 1979 Phillies team.  Based on the listing here, it looks as if that game was on July 15, 1979.  If you look closely at my profile picture, I'm holding a copy of the poster and I definitely need to write more about that first game at some point.

Social Media Blitz:  I'd also like to mention that I'm now on Twitter.  Please follow along, and you'll be automatically tweeted whenever the blog is updated.  And while you're at it, have you liked The Phillies Room on Facebook yet?
Posted by Jim at 8:00 AM

Email ThisBlogThis!Share to TwitterShare to FacebookShare to Pinterest
Labels: 1984, Stone

Seven? I have the updates listed as four total cards (bringing the total to 44 cards): Don Carman, John Russell, Jeff Stone, & Dave Wehrmeister. Whom am I missing?

The Standard Catalog (2001 version) lists 47 total cards. I have 40 of the cards listed, so I assumed the remaining 7 that I don't have make up the update series:

Perhaps the Daulton, Fireovid and Jeltz cards are part of the original set and I just don't have them?

The Daulton, Fireovid and Jeltz cards are news to me. I thought I had a complete set for over 20 years -- it doesn't help matters that the 2011 iteration of the Standard Catalog doesn't list the set. I wonder why it is they stopped listing it.

I think I remember reading somewhere (maybe Bob Lemke's blog) that it was getting way too difficult (and unnecessary) to track newer cards in the Standard Catalog. So they made the decision to just focus on updating listings for cards released up until 1980.

At some point, the Standard Catalog editors must have received confirmation that these cards existed . . . but do they?

Given the way the Phillies handled their Second Edition Team Set last year and the fact that Beckett's online catalog does have readily discernible omissions, I'd argue that the the need for a fully updated catalog is more important than ever.

Hi, great blog! I noticed the brown Vet Stadium seats, behind you in the picture. Back in the mid 90s, when they started to convert the seats to the new blue ones for the 1996 All Star Game, I picked a few of those out of the dumpster! Wished they had the orange and yellow seats, but I'm glad I have a couple of original Vet seats!

Just a heads up, came across a guy on eBay selling 1984 Tastykake Daultons, wasn't sure if you were still looking for one.

Thanks Matt! Mine is on its way. I'm down to just the Fireovid and Jeltz cards from the '84 Update set.