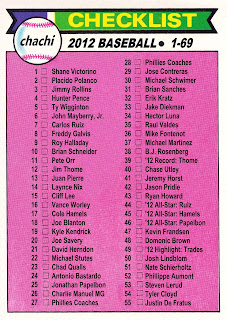 A little less than a year ago, I posted a blank version of the 2012 Chachi checklist card, hoping optimistically that the set would contain at least 100 cards.  Thanks to a lengthy (and successful) postseason run and several season highlights, the 2008 Chachi set was the biggest set to date, with 87 cards.  Alas, missing the postseason for the first time since 2006 and an overall uneventful year meant that the 2012 Chachi set eventually clocked in at just 69 cards.  That's the lowest total since the inaugural 2005 Chachi set and its 63 cards.

With this being the final card in the 2012 Chachi set, I've now updated the Chachi Sets gallery which contains links to the Picasa albums for each set since 2005.  I've added a place holder for the 2013 Chachi set for now, and the first official cards from the new set will debut on Opening Day.