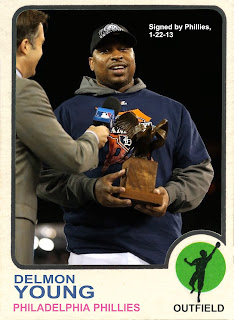 Todd Zolecki's opening lines in the Phillies.com article announcing the signing of outfielder Delmon Young sums up the situation perfectly:

"The Phillies found a right-handed-hitting corner outfielder with power.  But this one comes with baggage."

Young enjoyed a decent season last year with the Tigers, hitting .267 with 18 home runs and 74 RBIs.  He had a fantastic postseason, winning the ALCS MVP honors while hitting .353 with 2 home runs and 6 RBIs against the Yankees.  Young's best season was his 2010 campaign with the Twins when he hit .298 with 21 home runs and 112 RBIs.  So the numbers have been there, but so have the problems.

Young was arrested last year in New York on aggravated harassment charges and he was suspended 50 games in 2006 for throwing his bat at an umpire.  So he's not exactly the kind of guy who makes you want to collect his baseball cards.  The other fall-out here is that the newly acquired Michael Young will now have to have "M." appended to the back of his Phillies jersey.

Loved Delmon as a minor leaguer, but you're right, the baggage makes him pretty unlikeable. I think it's mostly maturity issues and having been "the man" from the time he was young.