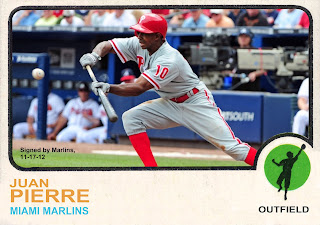 A week ago today, Juan Pierre officially became an ex-Phillie when he signed a one-year deal with the recently gutted Miami Marlins.  The deal makes sense for Pierre - he'll most likely lead-off and have an everyday job with the Fish.  I believe the Phillies would have brought him back, but he would have served as the team's fourth or fifth outfielder. 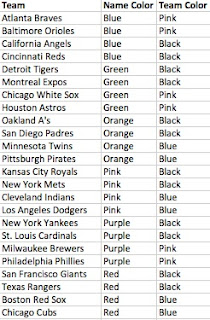 I can't explain why, but for some reason this type of stuff fascinates me.  How did the folks at Topps decide that the Phillies and Brewers were going to be represented by the colors pink and purple?  For the teams added post-1973, I've decided to go with the following combinations:

Can you tell I'm home for Thanksgiving, and I have a little extra time on my hands?  Isn't it glorious?