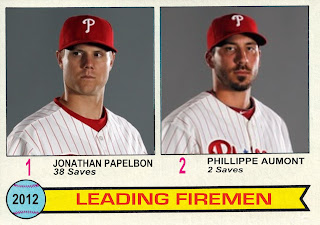 For the Phillies and their fans, it's been a slow off-season so far.  In prior Novembers, the Phillies made early splashes by signing big free agents or making an occasional trade.  To date, the only move made by the Phillies has been to sign third baseman Josh Fields (formerly of the White Sox and very briefly, the Royals) to a minor league contract.

By this time last year, Jonathan Papelbon had already been a Phillie for a few weeks.  Signed on November 14, 2011, Papelbon was inked to be the team's closer through at least the 2015 season.  He did a decent job in 2012, saving 38 of 42 chances and making the National League All-Star team.  The knock against Papelbon, other than his bizarre Cinco Ocho alter ego, is that he can't pitch effectively when the team is trailing or when the ballgame is tied up.

Only four Phillies recorded saves in 2012, which is less a testament to Papelbon's season as it is to the overall ineffectiveness of the rest of the team's bullpen.  This is one area in dire need of improvement for 2013.  I'm all for reuniting with our old friend Ryan Madson, if he'd be willing to serve as Papelbon's set-up guy.

I see you've put up your Christmas lights already--very nice!

They should have put Papelbon there alone. TWO saves shouldn't qualify for anything.

I thought we could use some holiday decorations around here!