I made good on one of my campaign promises from way back in February, and on Sunday Doug and I attended the baseball card show (the "Philly Show") held at the Valley Forge Resort and Casino.  It was Doug's first proper baseball card show and he was a little overwhelmed once he saw the size of the convention room floor and the number of dealers selling their wares.

Having my five-year-old son in tow was great for a few reasons.  First and foremost, I loved showing Doug the ropes of a proper baseball card show - from preparing my lists the night before, to making sure I had a good "crossing out" pen ready to go, to coming up with a navigation plan once we hit the convention floor.  A secondary benefit was that I had to be focused in my pursuit.  Doug is a patient kid, but he's not patient enough to stand by and watch me wade through an 800-count box of marked down Phillies cards for an hour.  My collecting goals for the show were to cross some cards off my 1971 Topps list and to track down some cool, old Phillies cards.

We immediately found a bargain bin of 1971 Topps high numbers, and he helped me find several cards from my list.  In total, I picked up nine stars and high numbers needed for my slowly progressing 1971 Topps set.  The cards are in decent shape, and I paid $20 for the lot.  I was very pleased with the price given that the Yaz card alone could have set me back that much.  Here's what I crossed off my list (with Doug's help):

After that, the goal was to look for "old" or "weird" Phillies cards and I think we did pretty well in our quest:

I'll need to do an upcoming post on the Ennis card, as it's clearly not Ennis featured on the front of the card.  It's actually Giants great Carl Hubbell, and the set's manufacturers simply recycled photos from its 1943 set for its 1949 issue.  And I'm thrilled to finally have the complete Phillies Postcard sets from 1983 in my collection.  The binder was an added bonus. 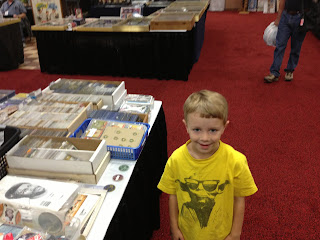 Several dealers were very impressed with how patient Doug waited by my side as I thumbed through boxes of Phillies cards for sale.  He's truly a good kid, and I was very happy when I found a dealer selling Lego Star Wars mini-figures.  Doug came away with Jango Fett and Mace Windu figures.  He also scored a few packs of Star Wars cards for his fledgling collection.  And special thanks goes to the dealer who threw in the free Luke Skywalker card for Doug's collection from the original 1977 Topps Star Wars set.

After two hours, including a snack break, we decided the show was a success and we should head out for lunch.  (On the way out, we bumped into former Phillies and Pirates pitcher Grant Jackson on his way in for his signing session.)  Overall, it was a great show and a nice introduction for Doug into the wonderful world of collecting.  He's already asked if we can go to the next show scheduled for early December and I told him he wouldn't need to twist my arm.
Posted by Jim at 8:00 AM

Email ThisBlogThis!Share to TwitterShare to FacebookShare to Pinterest
Labels: 1974, Robinson B.

great post. glad to hear it was a succesful trip and look likes some great cards there.

Agreed-great post! I've taken my nearly-5-year-old son there to the Philly Show a couple times, but mostly when he was younger and in a stroller. Last year we went and he was fixated on some antique toy cars that were both rusty and expensive! I got him off of it by buying him a small Phanatic figurine and promising we'd stop at Target on the way home and buy a cleaner and cheaper car. But I love the idea of going over the want lists the night before and making him a part of it. I'll do that in December! We do have some nice pictures together at card shows--most recently with Michael Barkann, Dallas Green, Ron Jaworski, Darren Daulton, Jay Johnstone, and a few more I forget now. Hopefully someday he'll appreciate those....

I had a full weekend of kid stuff and couldn't make it there myself. I need Danny Jackson's autograph on three items and Terry Mulholland's on four. Mulholland will be there in December, and there was zero chance I would be able to get there during the time Jackson was there this time, so I decided to use my chit with the Mrs. in December. But I have a couple comments/questions about your haul from the show:

2) That (so-called) Del Ennis card looks like it could be part of this Japanese series!: http://www.cable-car-guy.com/images/blog/2011/menko_001.JPG

3) How much did you end up paying for the 1983 Nostalgia Nights set?


I forgot to mention in my other post--it seems someone has always given something free to one of my kids when I have taken them. It's a friendly show like that.

I love how much stuff you can find at the Philly Show that eitehr you can't find, or that might go for a lot more money, on eBay. It's easier to find things on eBay, so you end up having a lot of competition. There are a bunch of oddball Phillies stands at the show that I try to hit each time, and I've made some nice additions to my collection at good prices. (One of my favorite--I once bought 75 assorted 1970s and 1980s Eagles programs for $75. The guy was just happy not to have to take those boxes home. My wife was equally thrilled--not.)

Wow, card show AND Casino in one spot!
How awesome is that?

Nice card haul! (and that's some good parenting too)