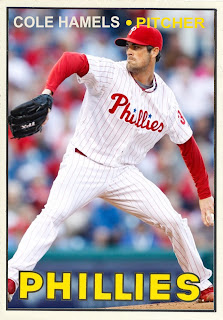 This is a friendly reminder that the 2012 Phillies Room Help Pick the 2013 Chachi Set Design and Maybe Get Free Stuff Contest has only two weeks remaining.  The polls close right before the first pitch of the 2012 World Series on October 24th.  See here for details.

To date, I'm more than a little surprised at how the voting is going.  I would have thought the 1971 Topps set would have been the run-away favorite to be the design for the 2013 Chachi set.  And quite frankly, the set that currently holds the lead, the 1973 Topps set, was a last minute throw-in because I needed a fourth card to balance out the poll.

Like the 1979 Topps set before it, the 1973 Topps set could come out of nowhere to win this thing.

The card I've featured here is for Jim from Downingtown, who suggested via write-in vote that I should consider the 1967 Topps set as the design for the 2013 Chachi set.  Although an action shot doesn't look right in the '67 Topps set, it actually doesn't look all that bad . . .