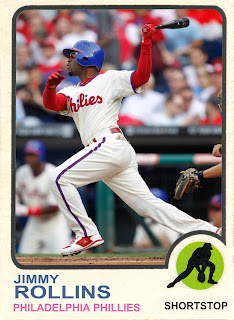 Thanks again to everyone who voted and left comments in the 2012 Phillies Room Help Pick the 2013 Chachi Set Design and Maybe Get Free Stuff contest!  As announced yesterday, the 1973 Topps set will be the design I use for the 2013 Chachi set, which will make its debut on Opening Day 2013.  Per the official contest rules, there will be two winners of The Great American Baseball Card Flipping, Trading and Bubble Gum Book:

The first part is easy.  There were 18 entries earned for the 18 comments on the post, less two for anonymous comments, and two additional entries gained via cross-blog promotional posts.  After inputting the 18 total entries into a random list generator, the first winner is . . . 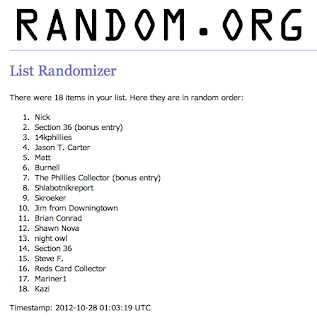 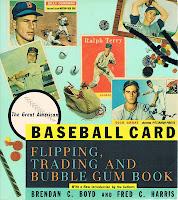 The second part is not so easy and in retrospect, I shouldn't have left this up to so subjective a criteria as "best comment" left on this post.  What does that mean exactly?  Does "best" equate to the funniest or the most well-thought out or the longest comment?  I honestly consider every comment to be a great comment as it's always terrific to get feedback from everyone and interact with my fellow Phillies fans and/or baseball card collectors. 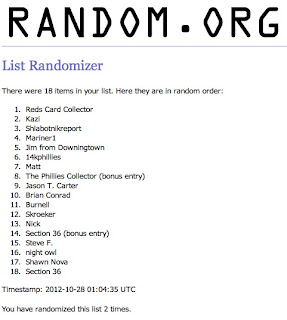 Nick and Reds Card Collector, please e-mail your mailing address to me at Ringo73 dot msn dot com, and I'll ship your new books out to you as soon as the Frankenstorm set to batter the East Coast has died down.  Thanks for reading!
Posted by Jim at 8:00 AM

I have this book--on this stormy night, I'm going to try to dig it ut and re-read it. I only remember two items in there: Don Mossi, the ugliest man in baseball, and Walt "No Neck" Williams. Harsh but hilarious!