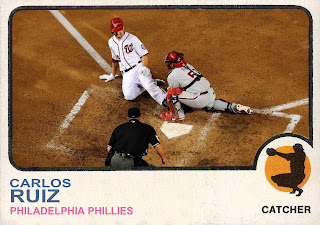 The voters have spoken and The Phillies Room Executive Committee has agreed with their choice.  The 2013 Chachi set will be based on the often overlooked, but always appreciated, 1973 Topps set. 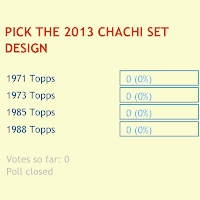 I was out of town for a few days this past week, and when I checked the results of the Pick the 2013 Chachi Set Design poll on Thursday morning, the image you see to the right is what greeted me.  Stinkin' Blogger.  Fortunately, I had checked the poll on late Wednesday afternoon, and unless there was a crazy surge in the voting between 5pm and 8pm, I think these were the results I remember seeing:

(Plus or minus a few votes here and there.  Good thing this poll wasn't too important!)

As I mentioned earlier in the week, I'm a little surprised at the love shown to the 1973 Topps set.  But here were some of the favorable comments the set received:

"I voted for 1973 because that's a 1970's set that doesn't get enough love.  I also know that, unlike the 'throwback people' at Topps, we can trust you to use the right icon for left- and right-handed pitchers." - shlabotnikreport

"I vote for 1973.  I've always loved the photos in that set.  But you have to do one thing if you do it--have some ridiculously far away, but exciting, action shots (maybe with cars and a chain-link fence in the background) . . . " - Steve F.

"I went with the '73.  Just a classy look to it.  Big phan of the position silhouette which gives it something that most sets haven't done and has been overlooked." - Brian Conrad

So who won the 2012 Phillies Room Help Pick the 2013 Chachi Set Design and Maybe Get Free Stuff contest, you may be asking yourself?  If Hurricane Sandy allows it, that's coming tomorrow.  It's the off-season, and I need to pace myself with my posts.
Posted by Jim at 8:00 AM

Sweeeeet! Love the Ruiz, looking forward to the rest.

You'd mentioned having a particular set in mind going into the voting... Would you be willing to admit what it was?

This is the second year in a row the 1985 Topps set has been passed over in favor of a vintage set from the '70s. Going into September, I was certain that '85 was going to be the design I'd use for the 2013 Chachi set, but the 1973 Topps design won me over.

Jenna wanted to go with the 1988 Topps design because she had vivid memories of hand collating that set back in the day.

Great choice, and a good (even if not intended to be a) tribute to Chris Stufflestreet months after his passing.

I can't wait to see them--it's off to a great start!