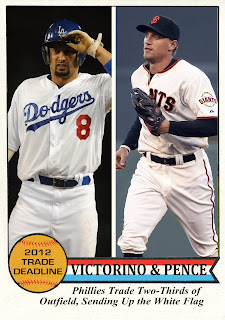 One Sentence Summary:  The Phillies battled but ultimately lost when the back end of the bullpen faltered.

What It Means:  Cliff Lee still has only two wins this year and no wins at home.  Hard to believe, Harry.

What Went Wrong:  First off (glass half full), here's what went right - The Phillies were clutch in the seventh and eighth innings, tying up the game twice.  In the seventh, it was a two-run Jimmy Rollins double that tied it up.  In the eighth, it was a RBI-triple from Kevin Frandsen.  Frandsen, by the way, made two stellar defensive plays at third base.

Featured Card:  Last night at the ballpark was Hunter Pence bobble head night, and the Phillies included a nice note from Pence with the bobble head thanking the fans for their support.  Pence of course was traded to the Giants on July 31st, a few short hours after the Phils had traded Shane Victorino to the Dodgers.

Since the trade, through Monday, Pence is hitting .211 in 19 games with the Giants.  He has one home run and 15 RBIs.  Victorino has fared slightly better, hitting .247 in 18 games with a home run and 7 RBIs.  Entering Tuesday night's late game, Pence's Giants held a half game lead in the N.L. West over Victorino's Dodgers.  I find it very difficult to root for either team, so I will choose to abstain and just root for Pence and Victorino to have successful Septembers.
Posted by Jim at 8:00 AM