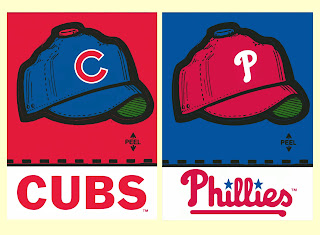 At the Ballpark:  Sunday is the Phanatic's birthday party with all kids receiving a Phanatic Bank.  There will also be on-field, pre-game festivities to celebrate the Phanatic's big day.  (It's funny how his birthday always seems to fall on a Sunday.)  Monday night is another Dollar Dog Night.

1979 Topps Flashback:  Featured today are two players who were part of probably the worst Phillies trade in the franchise's history.  Not pictured is the throw-in included by the Phillies when they sent perennial All-Star shortstop Larry Bowa to the Cubs back on January 27, 1982 - future Hall of Famer Ryne Sandberg.  Here are a few posts from several years back in which I cover the trade in a little more detail.

I didn't have Bowa's Topps card in 1979, but I definitely had his Burger King card which featured the exact same front.  That card was one of my early favorites in my small collection, and I would have been heart-broken had I known Bowa had just three more seasons remaining with the Phils.
Posted by Jim at 6:05 PM

Email ThisBlogThis!Share to TwitterShare to FacebookShare to Pinterest
Labels: 1979, 2012 Season, Bowa, DeJesus I.