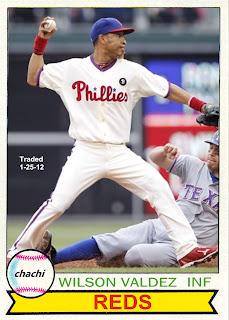 There has been a deal.  Just when I thought the Phillies 25-man roster was all but set, they go ahead and trade utility everywhere guy and fan favorite Wilson Valdez to the Cincinnati Reds for left-handed pitcher Jeremy Horst.  Horst appeared in 12 games for the Reds last season, striking out 9 and walking 6 in 15.1 innings pitched.  He could provide the team with a little more lefty reliever depth behind Dontrelle Willis and Antonio Bastardo.  Horst becomes the 17th non-roster invitee to camp:

17.  Jeremy Horst (lhp) - Reds - 2011 Bowman Draft #47 (Reds)
Valdez, who will be best remembered for his 19th inning pitching performance last season, joins former teammate Ryan Madson on the Reds.  The Phils are apparently comfortable going with either Michael Martinez or Pete Orr (or even Hector Luna) as their utility infielder option off the bench in 2012.

Orr doesn't play SS, and Martinez did so infrequently, I forget if he was any good there (we know Valdez was).

Maybe they're paving the way for Galves to become the 5th infielder midway thru the season.

I think they're anxious to see what Galvis can do, and he's a much cheaper option than Valdez.

There were also reports last night that the Phils were "bottom fishing" for a middle infielder with Ryan Theriot a possibility.