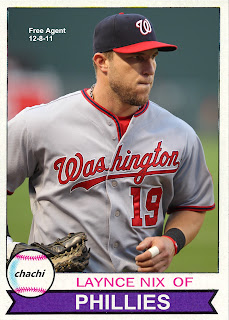 The Phillies have officially signed outfielder Laynce Nix to a two-year deal, slightly baffling Phillies fans across the nation.  As David Murphy points out in this High Cheese blog entry from earlier this week, last year's regular left fielder Raul Ibanez, who by all accounts had an off-year in 2011, still had a better year than Nix's average career numbers:

Murphy does a great job at trying to figure out just where Nix fits with the 2012 Phillies.  His conclusion - Look for Nix to supplement Ty Wigginton at first while Ryan Howard recovers from his ruptured Achilles' tendon.  Nix will also serve as a second left-handed bat off the bench behind Jim Thome and he could occasionally spell John Mayberry, Jr. in left.