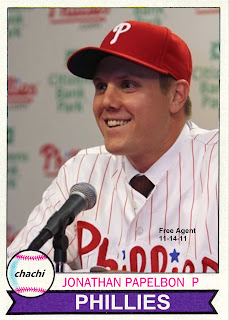 The Phillies have officially announced the signing of former Red Sox closer Jonathan Papelbon to a four-year contract with a vesting option for a fifth year.  The deal is worth $50,000,058 over four years, with that number going up to about $63 million (per various reports) if the fifth year kicks in.  It’s the largest contract for a closer ever.  Yikes.

Papelbon has won a World Series with the Sox and he reached the 200-save threshold faster than any pitcher in history.  In 396 games with the Red Sox from 2005 through 2011, he saved 219 games out of 248 opportunities.

I’m not sure what to make of this yet.  The team was apparently very close to re-signing Ryan Madson for the same duration, but for less money, but the deal completely fell through.  (Although GM Ruben Amaro, Jr. has stated that reports of an imminent deal with Madson were completely false.)  We now have one of the best closers in the game, but I can’t help but have a little concern over the length of the contract.  Will he really be the team’s closer through the 2016 season?

I turned to my favorite Red Sox fan over in Section 36 with my concern, asking him if I should be worried.  His response helped calm my nerves a little, even though his last point will prove to be completely off the mark:


I guess "worried" depends on the financial state of the Phillies. He's a great closer. He'll rack up the saves. He'll be fun to watch come into games. Yes, it's a lot of years/money. He'll be good for most of it I would assume. I personally have a hard time giving any closer that kind of money. But, he'll help your team get to the World Series. You'll lose to the Red Sox, of course. But, NL Champs should be fine.

So that helped, but then I realized I had a few more questions:

1. Is re-signing Jimmy Rollins still in the budget?
2. How will Papelbon fare at Citizens Bank Park?
3. Why didn’t we just go with Madson, who is home-grown and would have cost less?
4. Madson was very popular in the clubhouse. Will Papelbon fit in here?
5. Will Antonio Bastardo give up #58, Papelbon's number with the Sox?

Only time will tell.

I agree with your worries. I don't feel comfortable with the signing and I have yet to talk to a Phillies fan who is genuinely excited about it. Not exactly a ringing endorsement for a "top signing".

I'm worried because I feel that closers, with the rare exception of a Rivera or Hoffman, tend to be like good running backs. They tend to have short shelf lives and flame out quickly. I'm worried that Papelbon's best years are already behind him and we'll be lucky to get one good year out of him. What if he goes the way of Lidge? If it means winning the WS, it's a great signing, but if not...

I preferred Madson as well, for all the reasons you mentioned plus he's "fresher" from a closer's standpoint. Not as much mileage on him yet.

Time will tell on this one, but I hope it doesn't impact other areas of need (Rollins, Hamels extension, LF, 3B, etc.).

Papelbon is good right now. He'll help you win games. But, I also agree with your concerns. Does this prohibit other moves? You know better than I do. If the Madson deal was really 4-44 or so, than Pap's better enough to get the little bit extra money. But, if it means not resigning Rollins or another player you need because of it, that's a problem.

Oh, and Bastardo better give up #58 after the contract Pap signed ending in 58. Otherwise, when he calls himself "cinco-ocho" he's going to sound even sillier than usual.