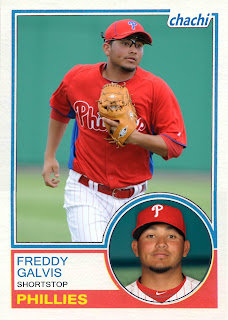 Could Freddy Galvis possibly be the Phillies starting shortstop on Opening Day 2012?  With Jimmy Rollins hitting free agency following the World Series and expected to seek a five-year deal, it's possible the Phillies could have an opening in the middle infield for the first time since the early 2000's.

Galvis, 21, started 2011 with Double-A Reading but made the jump to Triple-A Lehigh Valley in August.  He was named the Phillies Minor League Player of the Month in August and he was recently awarded the 2011 Paul Owens Award as the best position player in the Phillies minor league system.  Between both levels in the minors, he hit .278 with 28 doubles, 5 triples and 8 home runs.  He stole 23 bases and scored 78 runs in 137 total games.

Signed as an amateur free agent in July 2006, Galvis is originally from Venezuela.  Phuture Phillies, the source for all things related to the Phillies minor league system, ranked Galvis as the team's 14th best prospect following the 2010 season.  I'd expect to see Galvis climb up the rankings in 2011's list, and he'll undoubtedly get a lengthy look in March in Clearwater.
Posted by Jim at 12:00 PM