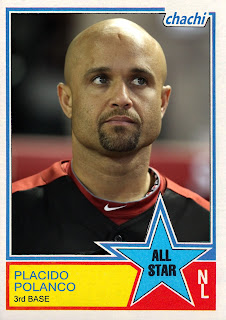 All-Star third baseman Placido Polanco had a brutal division series, managing just two hits in 19 at-bats for a .105 average.  It's fairly evident that his sports hernia hampered him throughout the last few months of the season, so it was no surprise when the team announced he'd be having an MRI before most likely going through with off-season surgery.

All NLDS-related post-mortems are depressing, but by far the most depressing was Matt Gelb's "stream of consciousness" report posted to Philly.com.  Gelb ponders the notion that the Phillies could have different opening day starters from Game 5 at first, shortstop, third and left field.  Ryan Howard's ruptured achilles could cause the slugger to miss the beginning of the 2012 season, and the Phillies have got to have real concerns about Polanco's ability to rebound from the series of injuries that limited his playing time in 2011.  Is he still a viable option at third going forward?

Gelb goes on to list the 10 players from the postseason roster that could be wearing a different uniform in 2012:

Amazingly, of everyone on that list, back-up infielder (and late, late inning reliever) Valdez is the most likely to return next year.  Any way you cut it, the 2012 Phillies are going to be a very different team.  Given the craptastic way the 2011 season ended, that's not necessarily a bad thing.
Posted by Jim at 12:00 PM

Contrast that with the Red Sox. Of the starters on the last day of the season, only JD Drew probably won't return. (I know breaks your heart.) I'm assuming that's a good thing.

To be clear...I'm assuming it's a good thing that 8/9 of the starters are returning. Not that Drew's leaving. I actually don't mind Drew in right.

Ruben Amaro, Jr. held a press conference yesterday and the vibe I got was that the Phils are definitely going to try to re-sign Madson but that Rollins will most likely move on to a team willing to give him 5 years. It's a shame, really. Rollins has been the heart of the franchise since the "dark times."

Thankfully, I don't think he'll go to the Mets. He's made it clear he wants to go to a winner since he's "not used to losing anymore." I could see him heading to San Francisco or Oakland, as that's where he's originally from and I think both those teams have a need at short.

As do the Red Sox.