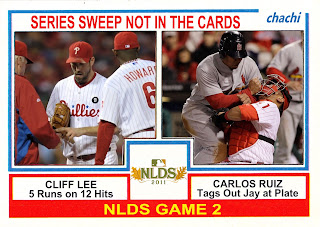 What It Means:  The series is tied up and Cole Hamels will take the mound in St. Louis for Game 3 on Tuesday afternoon.

What Went Wrong:  Following the second inning of last night's game, all was well.  It seemed inevitable the Phillies were going to take a 2-0 series lead as they had posted four runs to the Cardinals none and they had Lee (0-1) on the mound.  But Lee faltered in the fourth, allowing three runs.  The Cardinals would have tied it up then and there, if not for an outfield assist from Raul Ibanez that nailed Jon Jay at the plate.  Carlos Ruiz was run over, but still managed to hang on to the ball.

The Cards tied it in the sixth and took the lead in the seventh when Allen Craig led off with a triple that probably should have been caught by Shane Victorino.  Albert Pujols singled to bring Craig home with the eventual winning run.  Although he struck out nine, Lee allowed a career high twelve hits in his six innings of work.

After jumping on starter Chris Carpenter, the Phils were shut down by the entire Cardinals bullpen.  They put together an 0 for 15 stretch between the end of the second and the bottom of the seventh.

Featured Card:  It's not fun making these cards following a loss.
Posted by Jim at 7:45 AM