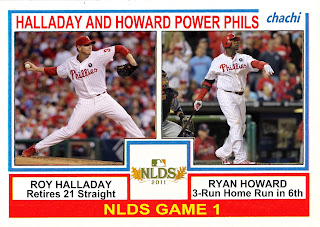 One Sentence Summary:  Roy Halladay settled in after a shaky first inning and the middle of the line-up came to life as the Phillies took Game 1 of the NLDS, 11-6.

What It Means:  The Phillies take a 1-0 lead in the series as Cliff Lee prepares to take the mound tomorrow night.

What Went Right:  Not much was going right for the Phillies until the sixth inning.  That's when Jimmy Rollins and Hunter Pence both singled to reach and Ryan Howard launched a bomb to right giving the Phils a 4-3 lead.  They never looked back.  Raul Ibanez homered to right a few batters later.  They added three more in the seventh and two in the eighth on Pence's RBI-single.

The one through six hitters all had solid nights, with Howard leading the way with his four RBIs.  Ibanez knocked in three while Chase Utley and Shane Victorino both enjoyed three-hit nights.

Halladay (1-0) allowed a three-run home run to Lance Berkman in the first while fans were still settling into their seats.  He allowed a single to Skip Schumaker to start the second . . . and that was it for the Cardinals.  Halladay set down the next 21 batters in order before yielding to the bullpen in the ninth.

Featured Card:  I'm using the Phillies "Batting & Pitching Leaders" card from the 1983 Topps set for this year's postseason games.  I'm not thrilled with how the horizontal NLDS logo looks in the center of the card, but I can live with it.

Tweet of the Night:  From MLB.com's Todd Zolecki - "Howard had no homers and no RBIs in nine postseason games last year. He was due."

Field Report:  Jenna and I enjoyed the game . . . from the sixth inning on.  The first inning silenced the crowd and there was definitely a collective anxiety in the ballpark while Cardinals starter Kyle Lohse (0-1) was pitching three perfect innings.  But Lohse's wheels fell off in the sixth and we cheered and high-fived and hugged and jumped up and down with the rest of Section 314.  It was sweet redemption since Lohse had a hand in ruining the first postseason game Jenna and I ever attended back in 2007.
Posted by Jim at 9:57 PM

Nice view for the game.

I really like this subset, nice job with them.