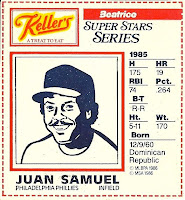 I recently received a nice package from Matthew, fellow Phillies fan and proprietor of the fine 14,000 Phillies blog.  (It's actually 14,519 and counting as I write this, but can you imagine trying to change the name of your blog every time you added a card to your collection?)

There were several recent Phillies inserts in the package, including a few nice autographs, a relic card for the newest member of the Colorado Rockies, Kevin Millwood, and a 1999 Finest insert featuring both Scott Rolen and Pat Burrell.  Matthew also added a few 1985 O-Pee-Chee cards to my expanding collection of Canadian Phillies baseball cards.

But the highlights of the package were two cards originally available only with a purchase of butter.  Back in 1986, one-pound packages of Keller's butter came with one of six Phillies baseball cards affixed to the package.  Matthew sent along his doubles of the Glenn Wilson card (seen here) and the Juan Samuel card.

Thanks Matthew!  I believe I'm now only four cards short of having a master set of every Phillies baseball card originally packaged with butter.
Posted by Jim at 7:00 PM

Email ThisBlogThis!Share to TwitterShare to FacebookShare to Pinterest
Labels: 1986, Samuel

Thankfully, it's not that hard to update the name of the blog, and I don't update it every time I add cards to the collection. In fact, the 14,519 was two weeks old, but spurred on by your post, I updated it after getting today's shipment of cards.

Glad you enjoyed the Samuel and Wilson cards.