One Sentence Summary:  Lyle Overbay stunned Roy Halladay (and everyone else in the ballpark) with a two-run double in the ninth to give the D-Backs the lead and eventual 3-2 victory.

What Went Wrong:  Halladay (15-5) had never before lost a lead in the ninth inning before this game.  (He had also never doubled before, which he did in the seventh, but that seems kind of trivial now.)  After striking out the side in the eighth, Halladay seemed poised to clinch his 16th win and pitch another complete game when the ninth inning started.  He allowed back-to-back singles to start the inning, struck out Chris Young and then allowed Overbay's deflating double.

The offense managed only two runs on Shane Victorino's two-run home run in the fifth. 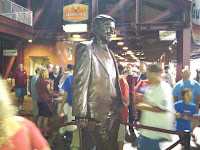 Featured Card:  On the night all fans received his bobble-head, Placido Polanco was feeling a little "green" from the sports hernia that landed him on the disabled list.

Field Report:  A friend of mine had an extra ticket for this game, and he kindly invited me to attend with him.  And it was a perfectly enjoyable evening until Overbay's double.  I added a Polanco bobble-head to my collection, I picked up yet another Phillies Team Issue Series 2 set with a new Hunter Pence card included and I got to see the brand new Harry Kalas statue unveiled prior to the game.  (More on the Pence card in a future post.)  The Phillies are now 8-4 in games I've attended this year.
Posted by Jim at 10:44 PM