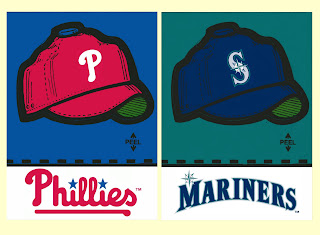 First Game:  This is the third series these two teams have played since the utter blasphemy of Interleague play was introduced.  The Mariners swept the Phillies at The Vet back in 2003 and they took two out of three when the two teams met in Seattle back in 2005.

On June 3, 2003, old friend Jamie Moyer shut down his future team through seven innings as the Mariners won, 4-0.  Bret Boone went 3 for 4 for the M's, driving in two runs.

At the Ballpark:  There's all kinds of stuff going on at Safeco this weekend.  Fans tonight will receive a replica green Ichiro jersey and tomorrow night is King Felix knit cap night.  For Father's Day on Sunday, Dads will receive a set of Mariners coasters.

I say welcome to the Emerald City to the Phillies and all the fans. It is great to see Raul Ibanez, Cliff Lee, and Sam Perlozzo back in town.

While I hope to see the Phils leave winless, I still welcome you to town. Enjoy the city of Seattle, Philly fans. It is great to have you here.

I'm definitely looking forward to visiting Seattle one day. It's been a great series so far!