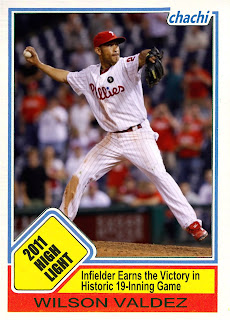 One Sentence Summary:  Raul Ibanez hit a sacrifice fly in the bottom of the 19th to score Jimmy Rollins and secure the win for infielder Wilson Valdez in a very long, strange game.

What It Means:  It means I was very tired at work today.  For some odd reason, I decided to stay up and watch the entire game even though I was fairly tired when the game began.  The victory raised the team's record to 30-19 as they maintained a one game lead over the Marlins in the division.

What Went Right/Wrong:  This game had so many twists and turns, I've opted to forego paragraphs and just go the bulleted list route.
Featured Card:  As I was trying to fall asleep last night, I decided Valdez' feat deserved its own Chachi highlight card.

Other Stuff:  Over at The Writer's Journey, JT agreed the game resulted in some "crazy stuff."
Posted by Jim at 9:59 PM

Amazing stuff. Looked up Baez performance and it was the first time he'd pitched 5+ innings since his time as a starter in 2002. Great work out of the pen.

I read that Manuel was going to pull him after 3 innings, but Baez informed the manager he still had a little more left in the tank. Truly a gutty performance.