One Sentence Summary:  Ryan Madson had his first rough outing of the year, capped by Jay Bruce's three-run double in the ninth, as the Reds won, 6-3.

What Went Wrong:  Madson had a 13-game scoreless streak snapped as a result of Bruce's big hit.  The ninth got off to a rough start when Drew Stubbs laid down a bunt fielded by Madson.  Madson threw the ball past Ryan Howard at first and things unraveled from there. 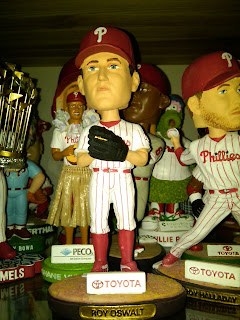 Starter Vance Worley pitched well at the outset, but then sputtered in the fifth inning.  He began the frame by allowing a six-pitch walk to Reds pitcher Johnny Cueto.  Cueto and Drew Stubbs, who doubled to reach, both came in to score on Brandon Phillips RBI-single.

What Went Right:  Raul Ibanez continued his hot streak, going 3 for 4 with two runs scored and an RBI.

Featured Card:  Until this game, Madson had been wonderful in the closer's role so far this year.  Last year, things didn't go so well as he was seemingly easily rattled when handed the ball in big pressure situations.  He did manage to save five games in 2010, a distant second to Brad Lidge's 27 saves.  Also recording saves in 2010 - Jose Contreras (4), J.C. Romero (3) and Nelson Figueroa (1).  It was actually Figueroa's second career save.

Field Report:  Jenna and I were there and it was a gorgeous night for baseball.  The Phils are now 4-3 in games I've attended this year.  It was also Roy Oswalt bobble head night, and I've already added Roy to my bobble head shelf in the "real" Phillies Room.  Jenna has graciously agreed to allow her Oswalt bobble head to be offered as trade bait.  So if you're interested, please check out my wantlists and make me an offer I can't refuse.

Other Stuff:  JT, over at The Writer's Journey, made Bruce's three-run double the focus of his card commemorating the game.
Posted by Jim at 9:06 PM