It's been a slow off-season so far for the Phillies and for this blog.  This is the time of year when days go by with nary a mention of the Phillies in the sports section of the newspaper.  Much like the Phillies' players themselves right now, I'm taking it easy.  I look to start some off-season work-outs in mid-December, just to loosen up the arm and clear the cobwebs, and I'm hoping to have secured my new iMac by then as I try to figure out just how I'm going to create the 2011 Chachi cards.

My Phillies scrapbooks from the mid-'80s and early-'90s suffered the same fate.  I'd have a few pages detailing the Postseason and then there would be a large gap in time between the naming of the league's MVPs and the date when pitchers and catchers reported to Clearwater.  (The one exception being the 1991 off-season, when I painfully chronicled the courting of and ultimate rejection by free agent Bobby Bonilla.) 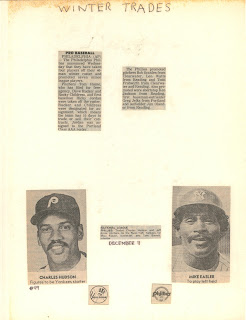 The 1986 off-season garnered just one lonely page in my scrapbook.  I cut out a small blurb to document a few roster comings and goings, including the end of the Rocky Childress era, and I clipped the transaction line on December 11, 1986, to show the acquisition of Mike Easler from the Yankees.  No fanfare, no real excitement on the page, and even the Hit Man's photo caption seems bored:  "To play left field".
Easler appeared in just 33 games for the 1987 Phillies, before they shipped him back to the Yankees in mid-June.  His .282 average with the Phils was just fine, but I guess the team was disappointed with his power output - 1 home run and 10 RBIs.  The young Chris James moved over to left and the Hit Man era, much like the Rocky Childress era before it, was over.
Easler appeared as a Phillie on just three baseball card sets - Donruss Opening Day, O-Pee-Chee (with the "Now with the Phillies" tag) and the Tastykake Phillies set.  I borrowed the photo from the Tastykake set for this Topps card that probably would have appeared in the 1987 Topps Traded set if Easler hadn't been shipped back to the Yankees.
And the slow off-season continues.

24 Years Later:  Little did I know as I clipped out the pictures of Easler and Charles Hudson back on 12th Street in 1986 that my first son, Doug, would be born exactly 24 years after this trade was made.  That event has worked out much, much better than the Easler trade.  No contest.
Posted by Jim at 12:00 PM