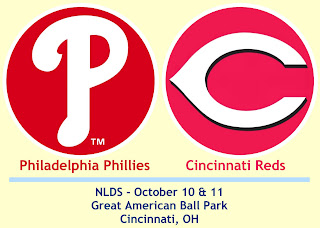 What's what:  The Phillies have a 2-0 lead in the best of five series.  If needed, and God willing it won't be, the two teams will come back to Philly for a Game 5 on Wednesday night.

The Phillies as a team have done very little to win these first two games against the Reds.  Roy Halladay's no-hitter in Game 1 made the relative lack of offense by the Phillies (other than Shane Victorino) a non-story.  The Phillies had absolutely no business winning Game 2, but the Reds' pitchers' decision to go wild and the Reds' shoddy defense conspired to hand the game over to the home team.

To date, the only Phillies' home run against the Reds in the Postseason came back on October 10, 1976, 34 years ago today, when Greg Luzinski hit a solo 5th inning home run against Pat Zachry in Game 2 of the '76 NLCS at the Vet.  Let's hope The Bull gets some company in that category today.