The Phillies somehow won a complete mess of game on Friday night, taking a 2-0 lead in the best of five series with the Reds.  This game could not have been more different than the gem turned in by Roy Halladay just a few nights before.  I should have known immediately it was going to be a rough night when upon taking the first bite of my grilled Italian sausage (with onions and peppers), the sausage broke through the bottom of the roll and left me with a hot pile of what used to be my dinner.  We had seats in Section 145 in center field, and despite the Italian sausage mishap, we thoroughly enjoyed the game.

The first four innings were rough - the Phillies weren't doing a thing offensively against Bronson Arroyo and the Reds had taken advantage of some average pitching from Roy Oswalt.  Heading into the bottom of the 5th, it was 4-0 Reds and Domonic Brown was waiting to pinch hit for Oswalt.  And that's when it started to get interesting for the Phillies.  I'm not going to try to completely summarize here what went down in the Phillies' half of the 5th, 6th and 7th innings and if you're brave enough, please try to follow along with my scorecard below.  At one point in the 7th, I turned to Jenna and said, "I honestly have no idea what's going on."  It was sometimes difficult to determine scoring decisions and it was even more difficult to see what was happening on the field through the occasional, jubilant white-out of waving rally towels.
But here are the highlights (or the lowlights if you're a Reds' fan): 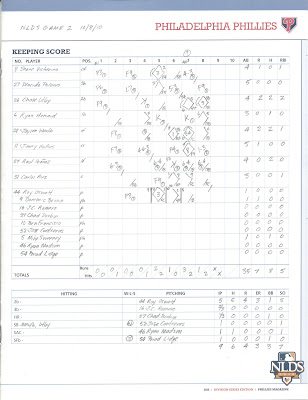 - The Phils scored two unearned runs in the 5th after Brandon Phillips and Scott Rolen booted successive ground balls, and Chase Utley atoned for his two earlier errors with a clutch 2-out single.
- Shane Victorino walked with the bases loaded in the 6th after both Carlos Ruiz and Ben Francisco were drilled with pitches.
- And then there's the 7th inning.  The inning began with Reds' phenom Aroldis Chapman hitting 101 on the radar with his first few pitches to Utley.  He then "hit" Utley to put the Phillies' lead-off man on base.

(In his post game interview, Charlie Manuel was asked how bad Utley had been hit.  Without missing a beat, he responded, "Bad enough to take his base.")
- Queue the calliope music:  The Phillies scored the tying and go-ahead runs when right fielder Jay Bruce completely lost a Jimmy Rollins' line drive in the lights.  Phillips botched the relay throw once the ball had been tracked down and that was that.
I had a tough time deciding on a picture for this Chahci card, but I eventually settled on a shot of Utley scoring the tying run while Reds' catcher Ryan Hanigan sums up the feelings of the Reds perfectly:  "Wait . . . what just happened?"
In summary, the game had six errors, only two of the Phillies' seven runs were earned, all eight of the Phillies' hits were singles, they left thirteen men on base . . . and they now have a 2-0 lead in the NLDS.
And the scorecard shows, or at least tries to show, how it happened.  Kind of.  I think.*
*Please see here for more discernable scorecards.
Posted by Jim at 10:53 PM

Way to bring home a W. It may have been ugly but at some point any win is a good win. I don't think you could of found a better photo for the Chachi card to summarize that game.

One last note - total bummer about the Italian Sausage. To be honest I think that is my favorite food item at the stadium - but there are so many way that it can get messed up. When it's good it's really good, when it's bad - it is just so disappointing.

Wow, that's a lot of players in the pitcher's spot. Thank goodness for the American League!

Must have been a great game to be at though. As any playoff game is.

On the Italian sausage debacle - I'm going with Bull's for the NLCS. No more messing around.

On the scorecard - This is the first time I've ever kept score at a play-off game and I did it more as a relaxation technique than anything. It worked. I was so busy trying to keep up that I didn't have time to have an anxiety attack.