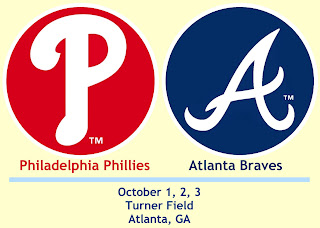 This is it.  At the beginning of the summer, this Braves' series loomed ominously as the final series of the season.  I had visions of the Phils being three back with just these three games to play and having my stomach tied in knots for the weekend.  Instead, for the Phillies, the games are essentially meaningless.  With the division clinched and home field advantage secured, all that remains is to figure out which team will be flying into Philly to start the NLDS on Wednesday.  Any combination of Braves wins and Padres losses totalling three, and the Phils will play the Reds in the NLDS.  If that doesn't happen, it gets too confusing for me to decipher here, but there's the possibility the Phils could face off against either the Giants or Padres in the NLDS instead.

These are also the final regular season games to be managed by Braves' manager Bobby Cox.  While I don't have a Phillies-themed Bobby Cox baseball card to feature here, I do have this lovely card of Braves' current first base coach, Glenn Hubbard.  This picture appears to have been taken during one of the Phanatic's early '80s birthday celebrations, typically held on a Sunday, and typically featuring a circus-like atmosphere.

Charlie Manuel has already announced that Roy Halladay and Roy Oswalt will not pitch again during the regular season.
Posted by Jim at 5:00 PM