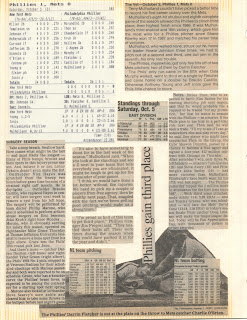 Sunday came and went and I didn't have the time (until now) to post last week's Scrapbook Sunday.  It's been a crazy week.
﻿
Back in 1991, the only thing the Phillies were able to clinch was a guaranteed tie for third place in the NL East.  With this win over the Mets, the Phils were guaranteed "their highest finish since 1986."  Wow.  They finished the year with a 78-84 record, 20 games behind the division leading Pirates.
In 2010, the Phils have clinched their fourth consecutive division title and they stand poised as (most likely) the favorites in the National League to return to the World Series.  Which, upon their return, would be their third year in a row in the Fall Classic.
Following Terry Mulholland's performance almost 19 years ago, manager Jim Fregosi said of his '91 squad, "I'm proud as hell of this team to get third place."  How far they've come.
Posted by Jim at 10:09 PM