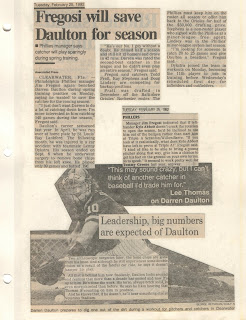 Without Darren Daulton's much-needed leadership and his 100+ RBI totals in 1992 and 1993, he would not have been elected to the Phillies' Wall of Fame this past Friday night. It's a brief Scrapbook Sunday today, as I've already been posting on overload throughout the day, but I'd be remiss without congratulating Dutch on this accomplishment.
Featured here are excerpts from an article that ran right as Dutch prepared to turn his career around and put together the back-to-back seasons that earned him a place on the Wall.
Posted by Jim at 4:00 PM