Unfortunately, the sanctuary of the baseball world is not immune to disruption from events occurring in the real world. Be it natural disaster (1989 World Series) or terrorist attack (9/11), the baseball schedule is interrupted from time to time. Expected protests and possible civil unrest due to the G-20 summit in Toronto caused the Phillies-Blue Jays series to be moved 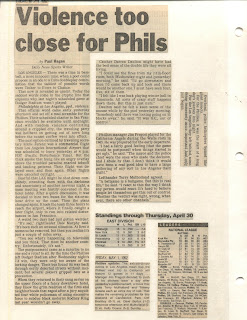 from Toronto to Philadelphia this weekend. Some of the protesting has turned violent recently, so it appears as if the city and Major League Baseball definitely made the right choice in relocating the games.
The Phils aren't immune to being caught in the crossfire of violence, as they were in Los Angeles back in April 1992 when a jury acquitted four police officers in the beating of Rodney King, sparking a week-long riot in the city. The team only played the first game of their planned 3-game series against the Dodgers, before the escalating violence caused the postponement of the next two games. The article featured here recounts the team's escape from L.A. as the city burned.
So while it's interesting and cool for us as Phillies fans to see an away game in our own ballpark, it's important to remember the reason for the relocation is due to the ever-present problems of the real world.
Posted by Jim at 12:00 PM