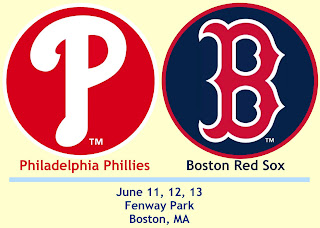 Records: Phillies 31-27, Tied for 2nd Place in NL East (2½ games behind the Braves); Red Sox 35-27, 3rd Place in AL East (5 games behind the Rays). How is it the Red Sox have played 4 more games than the Phillies? I think the Phils have only had two rain outs so far, so I'm guessing it's just a scheduling quirk?

1997 Phillies Team Issue #7 Terry Francona MG
Interleague, Sminterleague: Yes, I am nervous. In 2009, the Phillies went 6-12 in Interleague Play, which included a record of 1-8 at home. In 2008, they went 4-11. A respectable 8-7 record in 2007 was preceded by a horrible 5-13 record in 2006. I could go on, but the gist is this - the Phillies, for the most part, stink against the American League. Their next 15 games are against American League teams and only 3 of those games are against a team with a sub-.500 record. (The Indians are last in the AL Central with a 23-36 record.)
It all starts tonight against the Red Sox, a team that was struggling to stay above .500 when the Phils played them in May. But Terry Francona's team has gone 11-6 since taking 2 out of 3 from the Phillies, and the Phillies have gone 5-10 in that same span, scoring 1 run or less in 7 of those 10 losses. It does no good to whine, but why couldn't we have played a series against the Orioles instead of getting 6 games against the Red Sox?
Phillies Probables: Jamie Moyer, Joe Blanton, Kyle Kendrick
Red Sox Probables: John Lackey, Daisuke Matsuzaka, Tim Wakefield
Posted by Jim at 12:00 PM

This is why interleague play is dumb...why are the Phillies playing the Red Sox 6 times...does either city care that much? I know there have been years where I've seen 6 games between the Diamondbacks and Tigers simply because neither team has a nearby rival in the other league.