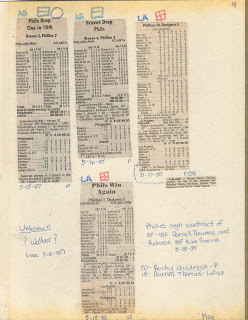 25 years ago this week, the Kiko Garcia era for the Philadelphia Phillies came to an unceremonious end. Kiko had signed with the Phillies in March 1983, after spending the prior two years with the Astros. The 1983 season would be the most successful of his 10-year big league career, as he hit .288 for the NL Champs, appearing in just over half the team's games as a utility infielder. Joe Morgan, the regular second baseman for the Wheeze Kids, got plenty of days off throughout the season, and Kiko filled in nicely.

His playing time decreased in 1984 and in 1985 he appeared in just 4 games before being released by the Phillies on May 17th. He'd never make it back to the Majors, but Kiko was still bouncing around the independent leagues as late as the 1997 season, when he was 43 years old.
Walker, Mystery Phillie: My note on the bottom left indicates another mystery Phillie appearing in a box score. On May 10th, a "Walker" pitched a third of an inning for the Phils according to the box score I clipped from the Atlantic City Press. Unbeknownst to me until many, many years later, "Walker" was actually Phillies reliever Dave Rucker. The Atlantic City Press box score editor had failed me again.
Posted by Jim at 12:00 PM