Red Sox at Phillies: May 21st through May 23rd 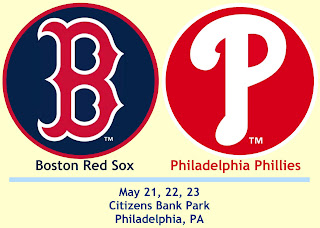 Records: Red Sox 22-20, 4th Place in AL East (8½ games behind the Rays); Phillies 25-15, 1st Place in NL East (4 games ahead of the Marlins)
Former Red Sox with the Phillies: Radio broadcaster Larry Andersen (see below) pitched with the Red Sox in 1990, anchoring the bullpen and helping the team reach the 1990 ALCS. Jamie Moyer made a brief appearance in Boston, pitching the first half of 1996 with the team before they dealt him to the Mariners in June for outfielder Darren Bragg. Reliever J.C. Romero appeared in 23 games with the 2007 Red Sox before being released in June of that year. He latched on with the Phils, and helped the team win the NL East.

1991 Topps #761 Larry Andersen
Worst Trade in History?: Other than the Ryne Sandberg deal? Perhaps its Jeff Bagwell to the Astros on August 30, 1990 for Larry Andersen. Every time the team plays in Houston, one of L.A.'s broadcast partners inevitably brings up the trade as one of the TV camermen deftly pans in on Bagwell's retired number hanging at Minute Maid Park. But looking at Andersen's stats in September 1990, it appears as if he definitely helped the Sox on their way to the AL East title. In 15 games with the Red Sox that month, Andersen appeared in 15 games and compiled an ERA of 1.23. The Red Sox lost to the mighty A's in the ALCS, so their attempt to win a World Championship had to wait a few more years. Bagwell never won a ring with the Astros, but his career numbers garner him serious consideration for the Hall of Fame. I'd be curious to hear the thoughts of someone from Red Sox Nation regarding this trade.
And a Quick Editorial on Interleague Play: It's time has come and gone, and now it's time for it to stop. Bring back the balanced schedule.
Red Sox Probables: John Lackey, Daisuke Matsuzaka, Tim Wakefield
Phillies Probables: Cole Hamels, Kyle Kendrick, Roy Halladay
Posted by Jim at 12:00 PM

In 1990 Jeff Bagwell was a AA third baseman in the Sox system. At AAA, the Sox had Scott Cooper, a highly touted 3B prospect. At the Major League Level, the Sox had Wade Boggs at third. You may have heard of him, and he was still good that year. So, third base was pretty well blocked for Bagwell. What if the Sox tried what the Astros did and switched him to first? The Red Sox had a AAA 1B at the time named Mo Vaughn. So, at the positions Bagwell played, the Sox had a HOFer, and a future MVP blocking the way. Bags was the definition of trade bait.

Now, you could argue that the Sox didn't get enough for him. But, as you mentioned, Anderson was a key member of the bullpen for a team that won the division. I don't know what else you're looking for in a deadline deal.

It's a risk trading any AA player for sure. Ask the Astros if they expected 450 HRs from Bagwell when they made the trade. You win some, and you lose some. Was it the best trade ever? No. Would I trade away another AA player who was third on the "depth chart" for a reliever that would help me win this year? Yup.

Also, it's not that I mind interleague play. I hate the way they group it together like it's an exhibition weekend. Why not just add the Phillies to a regular Sox road trip? Plus, how is it fair that the Sox play the Phillies six times while the Yankees get six against the Mets? It'd bad enough the wild card involves teams with different schedules. Can't the division schedules at least be the same?

Oh, and I thought about mentioning that Scott Copper was a 2-time all-star for the Sox. But, I figured even Phillies fans would remember that they were really just "every team need someone" selections.

I was hoping you'd take the bait!

I honestly didn't realize Bags came up as a 3B and he was pretty much blocked. At least the Andersen deal helped win a pennant. It's tough to argue the Sandberg/Bowa for DeJesus trade did much of anything for the Phillies. I've got to believe the '83 team would have won the league with Bowa still at short, and DeJesus wasn't much of a difference maker.

Completely agree with your statement on playing the same number of interleague games against the opposing league's division. But I'd be happier if they just pulled the plug on the whole thing.

Like Bagwell-Andersen, Smoltz-Alexander always comes up on these lists, and this annoys me...yeah Smoltz went on to play 20 years at a high level, but who can predict that...the Tigers in '87 needed a pitcher as they were in a penant race and Alexander did everything they needed that year...besides, Smoltz would have made little difference on those god awful Tiger teams of the Randy Smith era...in fact he might've traded him to the Astros along with 6 other minor leaguers for 6 of the Astros minor leaguers in a trade that would've made no sense for anyone involved