Phillies 5, Cubs 4
Game 40 - Thursday Afternoon, May 20th in Philadelphia
Busy at work, what with work and whatnot, I didn't get a chance to watch today's game. I wasn't even able to listen to the game via MLB's Gameday Audio. Woe is me.
What I did get to do was intermittently watch along with ESPN's GameCast. It's much more fun actually watching or listening to a live ballgame, but GameCast serves its purpose during afternoon games when I can't break away from the grind. But I wish they'd update some of the pictures they use to show who is up at bat. They had Ross Gload in a Royals' hat, and Gload hasn't played with the Royals since 2008 for gosh sakes. But I digress. 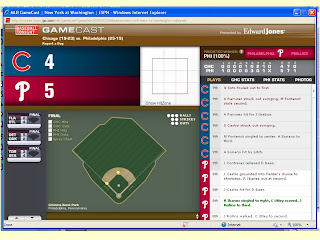 The balls and strikes and colorful graphics on GameCast told me Joe Blanton was pitching well, lasting into the 7th inning and giving up only 3 runs. I did a silent cheer in my office when Jimmy Rollins hit a 3-run home run in the 6th inning, followed shortly by a quiet boo when Antonio Bastardo surrendered a solo home run to Kosuke Fukudome in the 8th - the only batter he would face. The 2-out RBI single by Raul Ibañez in the bottom of the 8th merited a brief celebratory fist pump as the little yellow dot representing Chase Utley came around to score the go-ahead run. Finally, I breathed a sigh of relief when Jose Contreras (apparently still in a Rockies hat according to GameCast) recorded the final three outs for his 2nd save.
The Phillies won, and I was a productive employee the whole time. Well, most of the time.
Posted by Jim at 9:59 PM

Email ThisBlogThis!Share to TwitterShare to FacebookShare to Pinterest
Labels: 2010, Ibanez

nice homage to gamecast. There is something cool about checking out the moving boxscore at work.

I agree - it's better than nothing. And in my experience, ESPN's GameCast updates faster than MLB.com's comparable Gameday.