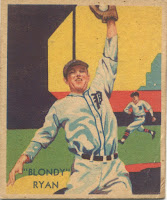 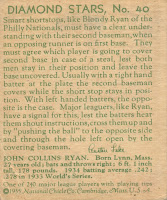 I've featured several cards from the new 2010 Topps National Chicle baseball card set in recent weeks, and I wanted to dedicate an entire post to the original Diamond Stars set to compare and contrast. In order to do that, I first had to obtain an original. I recently found this baseball card for a reasonable price on eBay, using the "Best Offer" feature. With its arrival, Blondy now usurps Chile as the oldest baseball card in my collection.

The Briefest Review of 2010 Topps National Chicle You'll Read: I like the new retro-themed set. Some folks have complained about the quality of a few of the paintings, and I agree some portraits leave a lot to be desired. However, this is a cool set overall and I've happily added the Phillies team set to my collection. If anyone reading this is horribly offended by their Topps National Chicle cards, please send them to me. I may just attempt to collect this set. 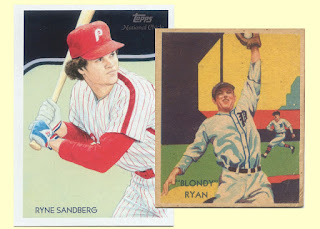 
How Did Topps Do?: They done good. The colors, print and style of the original are accurately captured on the new Topps set. The Topps cards are larger than the originals, but that's OK. Topps mimics the backs of the originals very closely, down to the layout and brief biographical information at the bottom.


R327: The original Diamond Stars set was released between 1934 and 1936 by the National Chicle chewing gum company. Designated R327 in Jefferson Burdick's American Card Catalog, the set consisted of 108 cards and featured Art Deco-style paintings, all the rage in the '30s. The year of issue can be determined by the player's statistics on the back of the card, as well as the copyright designation. The card backs feature a brief biography of the player, along with his full name, some vital stats and select on-field statistics from the prior few years.


A near complete set of Diamond Stars cards (from Charlie Conlon's collection no less) recently sold for just over $7,000.

Some 40 years after their issuance, a blank-backed proof sheet of 12 additional cards were discovered that would have brought the set size to 120 cards. Sport Americana, Beckett's predecessor in the price guide world, issued these 12 cards as "1937 Diamond Stars" in the early '80s.


John Collins Ryan: Infielder "Blondy" Ryan played in just 39 games for the '35 Phils and was sold to the New York Yankees in August of that year. As was the team's practice throughout the decade of the '30s, good players were traded off or sold once they attained some value. In 6 seasons with the White Sox, New York Giants, Phillies and Yankees, Blondy hit .239 in 386 games, and he finished 9th in the AL MVP voting in 1933.

1935 Phillies: The '35 Phils were not very good. The team finished with a record of 64-89, second to last in the National League. First baseman Dolph Camilli led the offense with 25 home runs and 83 RBIs. The team contained such notables as Bubber Jonnard, Dino Chiozza (Lou's brother), Orville Jorgens and (my favorite) Pretzel Pezzullo. Tragically, the team's starting second baseman, Mickey Finn, died during the season while being treated for ulcers. The sole highlight probably came on May 24th when the Phillies participated in the first ever night game, played against the Reds at Crosley Field. The Phils lost that match, 2-1.

The Phillies uniform depicted on Blondy Ryan's baseball card, with the Old English "P", was last worn by the Phillies in 1933. Their 1935 uniforms are actually similar in style to the alternate day-game uniforms the team wears today.
Posted by Jim at 9:57 PM

Email ThisBlogThis!Share to TwitterShare to FacebookShare to Pinterest
Labels: 1934, 2010, Ryan B., Sandberg

Bubber and Pretzel are my new favorite Phils